Nigerians, especially stakeholders in the nation’s maritime industry acknowledge that Nigerian ports are likely to be the most expensive in West Africa, and probably in Africa. The high cost of doing business in Nigerian ports is high largely because of the cost of clearing. 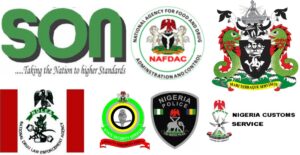 By cargo clearing, we are not referring to customs clearing alone, but the totality of the cost of getting the goods out of the ports, which include shipping and terminal operators’ charges and cost of customs clearing.

Even though the only dominant name in clearing is the Nigeria Customs Service, several government agencies are a regular feature of the port cargo clearance and delivery system.

The first thing that happens once a ship comes into the harbour is that officials of government agencies; notably, the Nigeria Immigration Service and the NIMASA go on board. There have been allegations that they board the ship empty handed and disembark with loads of goodies including foreign currencies, drinks and other assorted items.

That is the first act of corruption. From that point, the terminal operator takes over and moves the consignments to designated temporary storage facilities, while the importer or his licensed customs agent begins the process of taking delivery. From this moment, he is at the mercy of the container handler operator at the terminal, the Customs officer (and sometimes, the dockworker) at the terminal. If he is lucky and the container is not problematic, it may not be necessary to open his container for full examination; if this is so, he moves to the gate and still contends with a horde of agencies including, NPA Security personnel, the Police and the Customs and who must again, vet the documents before the container exits.

It is nauseating to see DSS and the Police getting so directly involved as if cargo clearance is there major reason for being in the port.

In all, these agencies have sub-divided themselves into splinters and they are all involved in the cargo delivery process.

From history, virtually all successive administrations have made futile efforts to streamline the presence of these agencies; perhaps the most daring was during the regime of former military President, General Ibrahim Babangida (rtd), which reduced the agencies to five.

At the end of the intervention, only the Nigeria Customs Service, Police, State Security Service (SSS), Standard Organisation of Nigeria (SON) and National Agency for Food and Drug Administration and Control (NAFDAC) were left in the port.

This effort was not allowed to yield any positive result as the remaining five agencies sub-divided their operations into units. At some point, there were at least 18 such units in the Nigerian port system.

The units are as ridiculous as their names, for instance, the Customs had Valuation Unit, Enforcement, Customs Investigation Unit (CIU), Gate, Task Forces; which included until lately, the Comptroller-General’s Task Force, CAC’s Task Force. Not only do these ridiculous creations interfere with the cargo clearance and delivery process, they were also avenue to enrich their operatives.

And when in 2011, the then-minister of finance, Dr Ngozi Okonjo Iweala first made the disclosure that the federal government was planning to take action on the number of its agencies in the ports, not many gave it a chance. She was reported to have expressed dismay at the plethora of these agencies and the effects of their presence on the nation’s economy.

Also, the Senate had at one time condemned the presence of multiple agencies operating in Nigerian ports. This position was made public recently when the upper chamber’s Ad-hoc Committee on the activities of the Bureau of Public Enterprises (BPE) visited the ports in Lagos.

Without mincing words, the nation’s port system has been under siege by these agencies whose operatives have become so powerful and who have become a big clog in the wheels of effective and timely cargo clearance and delivery.

Government’s efforts at ensuring that cargoes are delivered to consignees within 48 hours have been made difficult and impossible by these agencies and their personnel. There had been previous orders that these agencies should vacate the ports, but these have been outrightly disobeyed by the offices of these agencies and this is largely why more of them have found their ways into the port system.

This takes us to the ‘Executive Order’ that was given by Vice President; Yemi Osinbajo, which also borders on ease of doing business in Nigerian ports.

While reeling out the order, the Vice President had directed that, “all agencies currently physically present in Nigerian ports shall within 60 days harmonise their operations into one single interface station domiciled in one location in the port and implemented by a single joint task force at all times, without prejudice to necessary backend procedures.’’

There is nothing new about the list of agencies permitted to be in the ports. They still remain the same as contained in the October 26th 2011 directive of the Federal Government. They are: Nigerian Ports Authourity, Nigerian Maritime Administration and Safety Agency, Nigeria Customs Service, Police, Quarantine Service, Nigeria Immigration Service, Department of State Security (DSS) and Port Health.

It is already almost five years since the orders were given, yet what we see is bickering and mutual suspicion among the affected agencies. It is still a far cry from achieving 24 hours cargo clearance. There is nothing to indicate that it is achievable.

We are sure that the Vice President must have heard or read that, those agencies which he ordered out of the ports now create check points from where they ambush cargoes that have been cleared at the ports. Sadly, even agencies that operate from the ports are also seen mounting check points. This is a clear negation of the principle of Ease of Doing Business which the VP has been propagating.

Read Also:  Do you agree that SON, NAFDAC, and others should return to the port?

We are also aware that some of the agencies that were ordered to operate from outside of the ports are lobbying to come back.

While we are not for or against the moves, truth is, the ports need fully automation, where containers are compulsorily scanned and not subjected to physical examination. The ports need a Single Window.

We are absolutely in support of the Nigerian Ports Process Manual(NPPM), which is being spearheaded by the Nigerian Shippers Council.

It is desirable that businesses be done with ease at the ports and that cargoes are cleared within 24 hours, but a return to the era of plethora of government agencies will always hinder this ideal. There is no alternative to the much-mouthed Single Window, which if allowed to work side-by-side with the Nigerian Ports Process Manual will definitely change the narratives.