Danish container shipping major Maersk has set ambitious 2030 targets as part of its 2040 decarbonization strategy that includes having at least a quarter of its ocean cargo transported with green fuels. 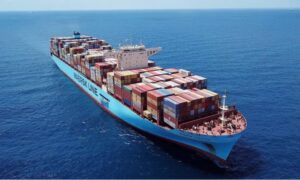 “Nobody can predict the future, and there is still a lot of uncertainty. In the next 18 years, new technologies and opportunities will emerge. We don’t have a detailed chart between 2040 and now that outlines every step. But, we know what will be the next steps ahead,” Executive Vice President Henriette Hallberg Thygesen said during Maersk’s ESG Day presentation held on November 22.

“What we do have is ambitious 2030 targets and a roadmap to get there.”

The roadmap will drive the company’s investments moving forward, and technology pathways for the company’s ocean transport branch have already been selected. Namely, the company aims to cut its emission intensity in the ocean space by 50% when compared to the 2020 baseline. This includes having at least 25 percent of ocean cargo transported with green fuels.

To achieve these targets Maersk plans to invest in fuel efficiency improvements including technical management, network execution, and network optimization as well as transitioning into green fuels by investing in green vessels and potentially retrofiting selected existing vessels.

Maersk has in total ordered 19 vessels with dual-fuel engines able to operate on green methanol, set for delivery through 2025. These ships are expected to generate annual CO2 emissions savings of around 2.3 million tonnes, according to Maersk.

Overall, Maersk needs approximately 6 million tonnes of green methanol per year to reach its 2030 milestone fleet emissions target and even larger amounts by 2040 for its fleet to reach net zero.

In order to overcome these challenges, Maersk has been on a massive partnership-building campaign with potential methanol producers from around the world and has so far concluded eight strategic green methanol partnerships.

Additional activities in the ocean scope will include the introduction of chartered green vessels as well as the use of biodiesel, Henriette said.

For its air transport, Maersk wants to have at least 30 percent of cargo transported with sustainable aviation fuels, for its logistics business the company has set out to have 90 percent of green operations with respect to its scope 1 and scope 2 emissions and using at least 20 percent of low and zero-emission technology for cargo movement in its landside operations. When it comes to terminals, Maersk is targeting a 70 pct emissions reduction from the 2020 baseline, including scope 1 and scope 2 emissions.