Maritime lawyers have scored the Suppression of Piracy and Other Maritime Offences (SPOMO) Actlow, and said that it has been less effective in the attempt to reduce piracy on the nation’s waters and the entire Gulf of Guinea. 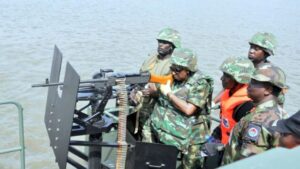 The SPOMO Act was signed into law in 2019 by President Muhammadu Buhari, with the aim of reducing piracy in the nation and the entire Gulf of Guinea.

However, two years down the line, maritime lawyers and industry stakeholders have described the law as being of minimal effect in the fight against piracy.

The legal experts observed that although the Act is a good initiative as Nigeria remains the first country in West Africa to have its own law on combating Piracy, but they said the Act lacks clarity on roles and responsibilities of enforcement agencies.

They also noted that there are other loopholes and that it is also riddled with grammatical errors.

Foremost maritime lawyer, Jean Chiazor Anishere (SAN) who highlighted the challenges of the Act also noted that lack of clarity on the roles and responsibilities of the enforcement is an oversight that may deepen inter-agency rivalry.

She also informed that the Act does not take into cognizance, that safety of the Gulf of Guinea is a collective effort and thus regional cooperation among Gulf of Guinea countries in the prosecution of offenders, will be most welcome.

According to her, “the Suppression of Piracy and Other Maritime Related Offences (SPOMO) Act, Is indeed a good step and initiative as Nigeria remains the first country in the west African coast to have her our own law on combating Piracy

“The challenges are grammatical errors that have been noticed in the Act e.g The very beginning of the Act: Explanatory Memorandum, erroneously makes reference to the word ‘privacy’, instead of ‘piracy’. To wit: “This Act provides for the Suppression of ‘Privacy’ and other Maritime Offences, gives effect to the provision of the United Nations Convention on the Law of the Sea (UNCLOS), 1982 the convention for the suppression of unlawful acts against the safety of Maritime Navigation (SUA) 1988 and its Protocols.”. “Of course one can imagine the drafting error and the interpretation disaster this will amount to”, she stressed.

Citing a specific case, she said: “The Federal High Court (FHC) in Port Harcourt on August 10, 2020 convicted three of the nine accused persons who on March 21, 2020, hijacked an Equatorial Guinea flagged vessel, the MV ELOBEY VI, off the Coast of Equatorial Guinea. This is the first conviction under the Suppression of Piracy and Other Maritime Offences (SPOMO) Act. The convicts Binaebi Johnson, Daniel Lemmar and Ghane Gordon pleaded guilty to counts 1 and 2 and not guilty to counts 3 – 5 of the charges against them.

“The Court convicted the three accused persons on counts 1 and 2 and imposed a fine of N10 million each for each of the counts. Well as this is a good gesture, the maritime stakeholders are of the opinion that since Sec. 12 of the Act provides for a maximum sentence of life imprisonment and a maximum fine of N50Million, as deterrence, a steeper sentence would have been in order, to prove a zero tolerance to Piracy and other related offences”, she said.

“The Act does not seem to take into cognizance, that safety of the Gulf of Guinea is a collective effort and thus regional cooperation amongst countries in the prosecution of offenders, will be most welcome” she noted.

“To say the Act has not helped to reduce piracy will not be correct, although more could be done; but what cannot be disputed, is that the SPOMO Act has sent a clear message to perpetrators plaguing the sea, especially the Gulf of Guinea, that it is no more business as usual”

“In my opinion, we still have a long way to go, good enough is the seminars and colloquiums organized by Nigerian Institute of Advanced Legal Studies (NIALS) and the Nigerian Maritime Administration and Safety Agency (NIMASA), which will help to reduce the lacunae and the bottlenecks in the execution of the Act, and in the prosecution of pirates within our territorial waters. As the saying goes: “Rome was not built in a day”, she stated.

Also speaking to our correspondent, another maritime lawyer; Mr Emeka Akabogu, stated that the efficacy of the SPOMO Act is subject to creation of an effective supporting framework for its implementation and the actual implementation by those responsible.

He noted that adequate patrol of the waters, up-to-date communication systems together with a well-trained and responsive team of enforcement officers are necessary to make the SPOMO Act effective. He also added that, the judiciary and the bar should also be regularly sensitized as to their roles.

In his words: “It is too early to make the call as to whether the SPOMO Act has been effective. The efficacy of the SPOMO Act is subject to two important conditions: first, creation of an effective supporting framework for its implementation; and secondly, actual implementation by those responsible.

“With regard to the former, Part 3 of the Act which deals with incident reporting and coordination of maritime activities is at the heart of the success or failure of the Act – adequate patrols of the waters, up-to-date communication systems together with a well-trained and responsive team of enforcement officers. Achieving this is subject to availability of necessary assets, proper governance and a honed work ethic. The extent to which the avowed ‘Deep-Blue Project’ will provide these, remains to be seen, but it is crucial that support assets are available, readily deployed and sustainably managed. This is the framework that needs to exist for effective implementation.

“With regard to the latter condition, assuming that the former is in place, all that is needed is the will and consistency of effort. In addition, the judiciary and the bar should also be regularly sensitised as to their role

“Crucially, the implementing agency needs to do its part. For instance, the Minister is to issue regulations under the Act to facilitate implementation, which I am not aware has been done. The SPOMO Act still needs some time for its efficacy to be tested with the identified conditions in place” he asserted”.