The Nigerian Navy on Wednesday said that maritime security improved much in the last five months.

The Director of Information, Naval Headquarters, Abuja, Commodore Adedotun Ayo-Vaughar, made the disclosure during a visit to the News Agency of Nigeria (NAN), Lagos Office. 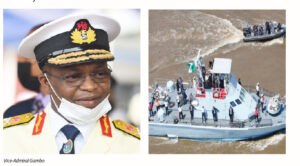 Ayo-Vaughar said that a number of people, including seafarers were taken hostage by pirates in the past.

“A lot of people were taken hostage by sea pirates. Seafarers, who were going for their businesses, coming for maritime commerce and trading in Nigeria, were affected.

“It affected the insurance premiums of many vessels.

“This was beginning to affect our trade, but the narrative has changed due to the efforts of the Nigerian Navy and with collaboration from regional and national
maritime stakeholders,’’ he said.

The spokesman said that in the past five months, piracy on Nigeria’s waters had been dealt with.

“It is a big plus for us. It is as a result of hard work of the Nigerian Navy, the will of political class and maritime stakeholders.

“We are happy for this and are putting in efforts to sustain it for the good of Nigeria,” he said.

Ayo-Vaughar praised NAN for support for the navy, and appealed for more support and cooperation from the agency.

“We acknowledge the services we have been receiving from NAN and solicit for continuity of your services as a government agency,” he said.

The Head of NAN Lagos Operations, Mr Ephraim Sheyin, who received the spokesman, said that NAN had a cordial relationship the Nigerian Navy.

Sheyin said that the navy was critical to the security of Nigeria’s maritime space.

He urged the director to always respond to questions from journalists about operations of the navy to promote accuracy in news reporting.

“Journalists ask for information; as much as possible, give us the right information to publish.

“If we have something we are not sure of, we will want confirmation from you. That is the only way we can do something credible.

“If our questions are answered, we will be able to tell the public the truth.

“We will continue to ask for such support so that we give the right information to the public,” Sheyin said.