The military says it has deactivated 33 illegal refining sites in the southern part of the country. 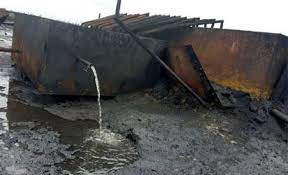 The Acting Director, Defence Media Operations, Brig.-Gen. Bernard Onyeuko, while giving update on a nationwide operation conducted by the armed forces, said the military made other discoveries.

He said further that troops of Operation Delta Safe uncovered 139 metal storage tanks and 63 dugout pits, all laden with 440.2 barrels and 1,637,500 litres of illegally refined kerosene.

He also said that 62.2 barrels and 572,000 litres of stolen crude oil and shelter stations were discovered.

He said that the troops disconnected all illegal pipes connecting to Shell Petroleum Development Company pipelines around Okporowo Right of Way in Ahoada East and Edeoha communities in Ahoada areas of Rivers.

He stated that the troops arrested “a notorious kidnapper” who had been on security watch list.