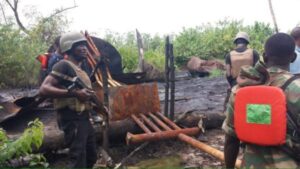 Acting Director, Defence Information, Brig.-Gen. Bernard Onyeuko, disclosed this while giving updates on the operations of the military across the country last week in Abuja.

Onyeuko said the troops conducted and recorded successes in series of anti-illegal oil operations in several areas in Bayelsa, Rivers and Delta during the period.

He said the operations led to the discovery and deactivation of several illegal refining sites with a total of 21 ovens, 12 dugout pits and 58 metal storage tanks.