Home » More Container Vessels Queue Outside Shanghai Port, As Business Gets Back To Normal

More Container Vessels Queue Outside Shanghai Port, As Business Gets Back To Normal

Queuing time off the Port of Shanghai, the world’s largest port, has kept dropping even as more ships make calls, which experts see as a healthy sign, as the Chinese economic hub is getting back on its feet after a two-month lockdown. 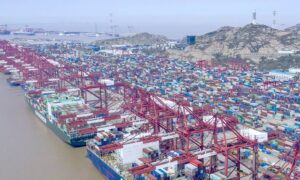 Shipping experts said as the port is getting back to normal, with a full recovery likely before October, more exports bound for the US are expected to get onboard, posing a challenge to the handling capacity of US operators.

Comparing research notes sent to the Global Times by Elane Inc, a well-known shipping data company, dated end-April, mid-May and end-May, the congestion situation at the Port of Shanghai recovered as the average time for vessels waiting to anchor increased from 28 hours at end-April to 71 hours in mid-May, then fell to 29 hours at end-May.

Thirty-four vessels were waiting in mid-May compared with 30 at end-May, both up from end-April’s 23, suggesting ships now wait for shorter periods as port efficiency improves.

Shipping experts said the shortened waiting time and recovered port calls could be a sign of more business getting back to the port, as the city declares that it will officially emerge from its “static management” on Wednesday.

The world’s No.1 port by container throughput underwent ups and downs during the past two months as COVID-19 flare-ups snarled supply chains.

In early April, the port was rumored to have witnessed serious congestion with some 300 vessels waiting off its waters. The rumors, which were proved wrong, reflected the port’s difficulties amid the epidemic. Indeed, its standing as No.1 was facing a close challenge from competitors such as Singapore.

However, the port, as part of the core function of the Chinese economic hub, banked on closed-loop management and innovative ways to transfer cargoes to nearby ports with ship-to-ship relocations to maintain its operations.

Zhang Yongfeng, director of the shipping market analysis department of the Shanghai International Shipping Institute, said there has been anticipation in the industry that in June, a deluge of goods headed for the US, previously stalled in the logistics chain, may be flowing to the Port of Shanghai as the metropolis reopens.

However, Zhang warned that there is uncertainty, since US consumption of Chinese products is declining due to the country’s tightening monetary policy and high inflation.

It’s possible that more shipments from China will add pressure to congested US ports, experts said.

The Port of Shanghai told the Global Times in a statement on Tuesday that the port “never stopped for a single day during the entire time span of this round of epidemic flare-ups” and held its global No.1 position in the first four months of this year, having handled 15.35 million standard containers at an annual growth rate of 1.9 percent.

In closed-loop management, more than 20,000 employees have been stationed at the port since mid-March, and it has issued over 800,000 green passes for truck drivers moving containers in and out of the port.

The port also said that infrastructure expansion projects, including automation, are on schedule.

On a year-on-year basis, container throughput stood at 84 percent of operations in April 2021.

Wu Minghua, a shipping expert based in Shanghai, said the surge this summer will test US ports’ ability to handle the jam, and cause delays and price hikes.

The Port of Shanghai will regain lost ground and could return to levels seen in the first quarter before the fourth quarter, said Wu.