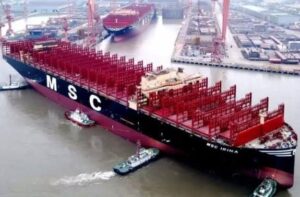 As informed, the boxship was undocked at Changxing Shipbuilding yard on 27 December.

The vessel, which was independently designed by the Chinese company, measures almost 400 meters in length, with a molded width is 61.5 meters, and a molded depth is 33.2 meters. It can carry more than 240,000 tonnes of cargo, and a record 24,116 standard containers can be loaded at one time.

According to Hudong-Zhonghua, the containership has currently the largest packing capacity in the world.

The ship integrates green, environmentally friendly features, with energy-saving technologies. It has become the latest design model of ultra large containerships in the world.

To remind, the first out of four new 24,116 TEU boxships MSC ordered in China was undocked in August this year. The second vessel in the same class was launched in China this October.

The vessels are equipped with a hybrid scrubbed desulfurization unit, a small bulbous bow, large-diameter propellers and energy-saving ducts.

At the same time, the ships use the bubble drag reduction system which reduces the total energy consumption and the corresponding total carbon emissions by 3% to 4%.

Currently, as part of its net-zero efforts, the company is exploring retrofitting projects involving various types of fuels including LNG and methanol.