Home » NAGAFF Coordinator Of Compliance Should be Investigated – Ofobike

NAGAFF Coordinator Of Compliance Should be Investigated – Ofobike

The coordinator of 100% compliance of the National Association of Government Approved Freight Forwarders (NAGAFF) Alhaji Tanko Ibramim, has again come under heavy criticism over his recent statement that importers and freight forwarders cheat the Federal Government through the use of Pre-Arrival Assessment Report (PAAR). 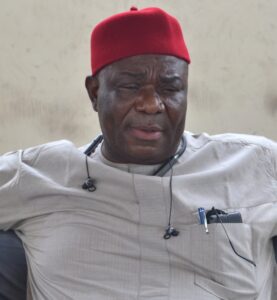 Speaking with our correspondent, a chieftain of the Association of Nigerian Licensed Customs Agents (ANLCA) Sir John Ofobike lampooned the coordinator of the 100% compliance teamof NAGAFF over the blanket statement in which he indicted freight forwarders as being dubious and unpatriotic.

But, Ofobike while recating to the allegation said that the NAGAFF chief is not compliant with extant customs rules, while asking that there is a need to investigate him to ascertain the kind of person he is.

The ANLCA chieftain, described Tanko as a blackmailer who cry foul when things don’t work in his favour.

He further alleged that the 100% compliance team is just a smoke screen to intimidate the Nigeria Customs Service (NCS).

Ofobike explained that there is no disparity in issuance of PAAR, stating that values are given based on the goods you bring in.

He said that every ex-factory price given in valuation is always approved by the Customs Area Controller while physical examination is conducted for vehicle declaration by Customs and all other approved government agencies in the ports.

He said: “When I look at the publication, I was baffled, the man who is talking, what is his background, where did he work before, how did he come into the business of freight forwarding, is he a clearing agent, is he trained, the 100 compliance team is just a smoke screen to intimidate Customs,

“How can he say agents are cutting corners, is it agents that import, the role of agents is to clear, to interpret the policy of the government to the importer.

“The man that is blowing this whistle now, go and make your investigation about him, who are his importers.

“There is no disparity in PAAR, Customs that gives PAAR have the reason of giving PAAR, customs only work with documents, they don’t know who owns the consignment,

“Just because somebody wants to make name, maybe because his business has flopped, he then generalised this

He added: “So this issue of Tanko, needs to be investigated, because you see different kind of people who come to the port claiming to be freight forwarder.

“There are so many forgeries in the system, so whoever point accusing fingers should be investigated,

“If some of the customs officers have the right to talk to press, they will tell you things that will amaze you

“This thing is a failed business deal, they are now fighting themselves” he said.