The National Association of Government Approved Freight Forwarders (NAGAFF) has appointed the immediate past Executive Secretary of the Nigerian Shippers Council (NSC) Barr. Hassan Bello, as the Grand patron of the association 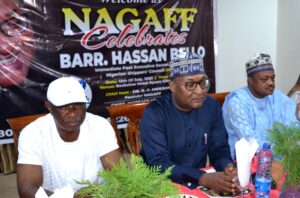 This is even as stakeholders in the nation’s maritime industry called on the federal government to consider him as the next Minister for Transportation.

While speaking at an event organised by the association to celebrating the retired NSC boss in Lagos on Monday, Founder of the association, Dr. Bonniface Aniebonam stated that Hassan Bello has proven himself over the years to be an exemplary leader.

Aniebonam rehearsed the impact of his tenure on the nation’s maritime and particularly how his influence and polices have made business and live easy for freight forwarders.

The NAGAFF founder noted that, if not for Hassan Bello, perhaps the council would have long time cease to exist,

He however called on the Federal Government to reward Hassan Bello’s hard work by appointing him as the next minister for Transportation come 2023. He stated that the former NSC boss merited consideration of being appointed Minister of Transportation.

Speaking earlier, the National President of the Association, Dr Increase Uche said there is every reason to celebrate Hassan Bello, describing him as a quintessential servant leader, humble, amiable and a purposeful man of action, great performer & an achiever per excellence who demonstrated vision and accomplishment in various ways during his tenure in office.

Uche stated that though the port witnessed remarkable and noticeable improvement within the first three years of the port concession era, but said from 2010 to 2013 the ports were characterized by uncertainties leading to ports congestion, traffic gridlock, high local shipping charges. cargo diversion to neighboring ports, highhandedness and arbitrariness by the service providers, long dwell time of cargo at the ports, long waiting time of vessels, server failures and endemic corruption, but noted that shortly after Hassan Bello took over the mantle of leadership of the NSC things were transformed ensuring efficient and timely delivery of Shipping services to Shippers and moderation and stabilization of costs (freight rates, Ports charges, local Shipping charges and haulage charges).

Highlighting some of the landmark achievement of Hassan Bello, while in office, the NAGAFF President listed the achievements to include abrogation of all forms of illegal and unapproved charges by the terminal operators and shipping companies, which brought about immeasurable relief to shippers and Freight Forwarders.

Mediation role to address all forms of arbitrariness by the service providers, promotion of inter-agency relationship to ensure synergy and collaboration amongst them, re-enforcement of the Complaint and Monitoring Unit of the Council for prompt response to complaints and grievances from users of port services.

Also eulogising the NSC boss at the event, the Vice President of the Association of Nigeria Licensed Customs Agents (ANLCA) Dr. Kayode Farinto, informed that the out-gone NSC boss changed the way Shippers Souncil used to work from a passive role to an acting role.

He also called on the federal government to confer on the humble NSC boss a National Award, stating that he is well deserving of the award.

Also speaking the Chairman for the Council for the Regulation of Freight Forwarders in Nigeria (CRFFN), Mr. Tsanni Abubakar, also described Bello, as a patriotic, focus and a humble man who carries everybody along, he said the out gone Shippers Council is a man who has zeal and resistance that can break protocols.

Mazi Chidebere Enelamah, Chairman Board of Trustees ANLCA, also described Bello, as a philanthropist who never took the office of CEO NSC, as a personal office but accepted and carried everybody along irrespective of their ethnicity.

Other stakeholders in the industry also took turns to eulogise Hassan Bello’s indelible feats which have left great footprints in the sand of time during his tenure in office as the Executive Secretary of the NSC.

In his acceptance remark, Hassan Bello, who was emotionally overwhelmed described the conferment as grand patron, and the celebration as an honoured he will never forget, he informed that he has never been so overwhelmed and emotional by the good accolades that were poured on him, while urging the freight forwarding industry to also give the same support to his successor, who he believes will perform very well.

The former Executive Secretary also said that local governments in the country could own ports of their own.

He added that this would help local governments to push out their products and help generate income.

According to him, the Federal Government should not be burdened with owning ports as they should be saddled with improving the system and regulatory functions.

“Restructuring should not just be for the economy. There should be restructuring in the three tiers of government and this will ensure that local governments own ports.

“In ownership of ports, local government can do that.

“For instance, Apapa Local Government should own Apapa port; this is how it’s been done in other climes, with Federal Government saddled with oversight function and security issues,” he said.

On the issue automation of the port system, he said that paperless transactions at the port was happening as most terminals are doing 60 per cent and above and a terminal doing 100 per cent.

He urged the Nigerian Ports Authority, and the Nigerian Maritime Administration and Safety Agency (NIMASA) to join the NSC to achieve automation of the port.

He added that apart from automation, it was also very important to integrate all systems, to make things to be transparent and processes simplified which would breed competition in the port.

“Once we have digitalisation and port community system, then the linkages in revenue will be addressed and Nigeria will be the preferred destination port of cargo for shippers,” he said.

He urged the freight forwarders to also give his successor the support given to him during his stay as the executive secretary of NSC.

Mr Adeleye Ajayi, Chairman, Nigerian Union of Journalists (NUJ), Lagos chapter, in his goodwill message noted that Bello would be remembered for his quest in processing the container depot which was a landmark achievement.