In commemoration of it’s 23rd Anniversary, the National Association of Government Approved Freight Forwarders (NAGAFF) is set to host and engage the four main Lagos governorship candidates in the coming elections on their plans for the development of the ports in the state. 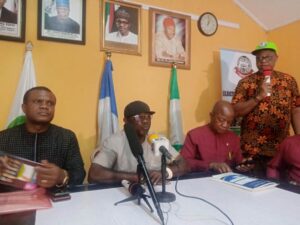 Speaking during a press briefing at the association’s headquarters in Lagos on Tuesday, the founder of the NAGAFF, Dr. Boniface Aniebonam noted that since the formation of the association in 1999, it has successfully ensured the implementation of the Deep seaports, outer port terminals and other significant reforms in the maritime industry.

Aniebonam noted that the focus of the association’s 23rd Anniversary is to promote unity and understanding among political gladiators as well as enable them to engage maritime stakeholders about what they intend to do differently.

The founder stressed that NNPP is an offshoot of the port industry under NAGAFF. He however called on all stakeholders support to add value to the party by voting for it in during the 2023 Presidential elections.

“NAGAFF is a pace setter. We are children of God. We are not against anybody and we can never be against anybody. When we took up in 1999. We began the advocacy of the Deep seaport and other terminals, looking at the cargo throughput and re could for see what is going on currently in the industry.

“The NNPP is the party to beat in 2023. You would not see NNPP in controversy under my watch. What is important is a new Nigeria. I would advise that you should all try as much as you can to add value to the new Nigeria. On the 22nd of December, I have directed that the Guber candidates of Lagos State under APC, NNPC, Labour Party and PDP should come as a Guests of honour. We would give opportunity to other Political parties who may be around to give a Five minutes talk to the maritime stakeholders. They should be able to tell us what they can do for us in Lagos differently. If we have a Lagos state governor that understands the problems associated at the port level, especially within the corridors, then that Governor will be adding a lot of value to us”, Aniebonam said.

On his part, the NAGAFF Deputy National President (Seaport) and Chairman of the Planning Committee for the event, Chief Afam Chukwuma noted that the association’s 23rd anniversary themed “Good Governance a Road Map to National Development” will hold on Thursday 22nd December, 2022 at Rockview Hotels in Apapa by 2pm prompt.

Afam also informed that the event will be an interactive session where high profile personalities such as the Guber candidates for Lagos, Commissioner of Police, top Customs official, various Government agencies and other relevant stakeholders in the industry will be in attendance.

“I urge you all to come prepared for this spectacular anniversary. As you know NAGAFF is the leading and biggest freight forwarding association in Nigeria and we are expecting very high profile personalities which include the Guber candidates for Lagos state, Commissioner of Police, Customs and various Government agencies will be in attendance. We have a lot lined up that day. Come prepared and it is going to worth the while” Afam concluded.