NASS Pledges To Back NRC To Achieve Seamless Operations 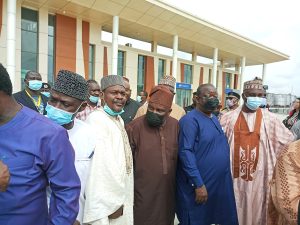 The National Assembly Joint Committee on Transportation has pledged to support the Nigerian Railway Corporation (NRC) with available legislative frameworks to achieve seamless transportation on the country.

The Chairman, Joint Senate/House Committee on Transportation, Abdulfatai Buhari, gave the pledge when he led members of the committee to NRC headquarters on oversight inspection of Apapa Standard Gauge Railway project in Lagos on Thursday.

He assured of the cooperation and support of the committee in continuing to ensure adequate support and beam light on the challenges faced by the corporation.

The chairman said that the committee’s commitment would guarantee excellent delivery on NRC’s mandate in line with international best practices.

“You are all aware that the joint committee is carrying out its statutory constitutional responsibilities to ascertain the level of work done.

“We are here to oversee how funds appropriated in the past fiscal years were expended and how much needed for the smooth running of the corporation against the next budgetary allocation.

“We had the benefit of listening to your presentation and recommendations at the last budget defense as regards the performance on 2020-budget and 2021 – budget appropriation,” he said.

Buhari said that the committee’s visit was not to witch-hunt the corporation but to collaborate in the rail revitalisation agenda which was infrastructural development programme of President Muhammadu Buhari’ administration.

The Chairman, House of Representatives Committee on Transportation, Hon. Abbas Tajudeen, urged the contractors to open channels of communication to enable the committee defend them on their requirements to make the land transport viable for business.

Tajudeen asked the management of the NRC to always make available their report quarterly to improve synergy with the National Assembly.

He said the committee also sought the need for housing scheme for workers to improve staff welfare which would enhance efficiency.

The Project Laision Officer of China Civil Engineering Construction Corporation (CCECC), Mr Yakubu Adogie, said they were still encountering challenges with signaling and communications since the commissioning in June.

Adogie added that the company would be able to surmount the challenges before the first quarter of 2022.

He said that CCECC was working on plumbing, power supply and telecommunications on other stations within Lagos-Ibadan standards Gauge railway project.

He said that despite intervention of the Minister of Transportation, Mr Rotimi Amaechi, in July and payment of compensation, the Nigeria Customs Service (NCS) longroom building had not been demolished to give way for the construction of the other two lines to connect Apapa port.

The Projects Manager of T. E. A. M. Construction Company Nig. Ltd, Leonardo Portanova, said there was need to sustain the power supply in the railway station.

He said that the Lagos State Government was constructing seven overhead bridges while Team was to construct six overhead crossings, adding that both of them could not block the road at the same time.

Okhiria said that due to the additional staff requirements for the operation of the new Lagos-Ibadan Standard Guage line, a total of 1,000 additional staff was been considered with additional wage bill of N567, 451,300 per annum.

He pleaded with the committee to support the NRC to achieve it quest to enable them expand their tentacles for efficiency.

The corporation also solicited the support of all stakeholders, including the National Assembly, in its quest for salary enhancements, adding that efforts have been ongoing with the National Salaries Income and Wages Commission (NSIWC).