The National Assembly has urged the Federal Government to put the new Murtala Muhammed International Airport (MMIA), Lagos terminal to use to boost the image of the country. 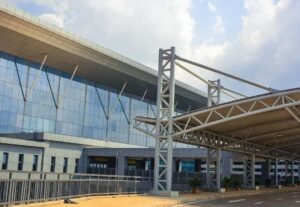 The new terminal is one of the four facilities built under the Nigeria-Chinese 500 million dollars loan deal signed in 2013.

The MMIA is built by the China Civil Engineering Construction Corporation (CCECC); the terminals in Abuja and Port Harcourt have since been completed.

Adeyemi said that if the facility was put to use, it would further improve the image of the country whenever travellers visited.

According to him, what the travellers will first see is the building which will create lasting impression of the nation on them.

He said: “For me, I think the edifice is 99 per cent completed and it is something that should be commended.

“However, it is also depressing that it seems to have been abandoned. It is not explicable for a project like this not to have been put to use since last year it was nearly completed.

“We think there is need for the Federal Airports Authority of Nigeria (FAAN) and the Federal Government to ensure that all obstacles disrupting the takeoff of the terminal building are removed.

“So that Nigerians can benefit from the multi-billion Naira expended here. I do not think that anyone will be able to defend this since the project has been completed. It must not be allowed to be abandoned.

“This is because we have had projects of similar types abandoned in this country. If care is not taken, we will see some of the premises becoming bushy,’’ he said.

The senator further said he confirmed that the Federal Government still owed the Chinese company, which could be the reason for delay of the project being put to use.

He appealed to the Federal Government to rescue FAAN so that it could take over the building.

He noted that it would be regrettable for the committee to revisit the terminal and still found it in the same form.

Commenting, Nnaji, said that the essence of constructing the new terminal was to support the old one and since it was not put to use, it had been affecting the former.

“It is also important that the Federal Government intervene in the Chinese loan so this can facilitate the opening of the terminal.

“More so, there is need for this terminal to be open so that you can use it to service the outstanding debts,’’ he said.

Nnaji, however, added that it was still the responsibility of FAAN to pay the money whether the government was supporting in repaying the loan or not.