The Nigeria Navy said it has rescued seven male victims who were abducted on May 10 by sea pirates off the coast of Bonny Island in Rivers. 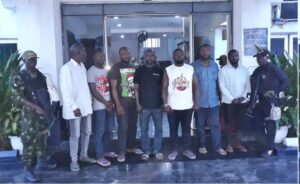 The seven passengers were transiting to Port Harcourt from Bonny when their commercial boat was intercepted and the victims abducted by pirates.

He said the kidnappers after they intercepted the commercial boat diverted it to an unknown location inside the thick swampy forest of the state.

“After the pirates kidnapped the passengers on May 10 along Bonny Channel near Yellow Platform, we (NNS Pathfinder) immediately mobilised and started tracking to identify the abductors.

“Through intelligence gathering, we were able to identify one Mr Victor Padei which intelligence revealed masterminded the abductions.

“Thereafter, we mobilised troops and stormed his camp (in Rivers) but unfortunately by the time we arrived at the camp, Padei had already relocated with his victims.

“Padei knows the terrain very well and he deploys his local informants who give him information on the movement of troops.

Ibrahim said further reconnaissance was conducted to determine the whereabouts of fleeing abductors which revealed the suspects relocated to another camp in Bayelsa.

“Again, we mobilised personnel in collaboration with our naval base in Bayelsa to raid the kidnapper’s camp but unfortunately they already relocated with the victims before we got there.

“However, intelligence later discovered another camp in Bayelsa where kidnappers held the victims against their will.

“Upon storming the kidnappers’ den, we applied pressure (force) and issued them (kidnappers) to release the abductees unconditionally.

“Subsequently, on the midnight of May 21, the seven victims were returned unharmed to us and they are currently with us,” he added.

The navy officer said that troops were currently on the trail of the Padei and his gang of kidnappers and assured of their arrest and prosecution in no time.

He called on members of the public to go about their legitimate businesses as the navy in collaboration with other security outfits has further secured the waterways in Rivers.

Narrating his ordeal, one of the rescued victims, Jude Ichikpro, 57, expressed gratitude to the Nigeria Navy for rescuing him and his fellow passengers from kidnappers.

The victim told NAN that after their boat was intercepted their abductors blindfolded and took them to an unknown area.

“We transited several hours by sea and later arrived at their camp which I am still not sure about the location.

“After, we arrived at the camp they gave us our phones to contact and inform our family members of our abduction.

“Thereafter, they (abductors) demanded N350 million (N50 million each) for the seven of us to secure our release; threatening to kill anyone of us whose family did not pay their ransom.

“I was horrified and worried that I would be killed knowing that my family cannot raise such huge funds to secure my release. So, I kept praying fervently.

“The entire experience was horrific as they kept threatening us. I was overly worried knowing that my family cannot raise such huge sums of money to secure my release.

Ichikpro, a Delta state indigene, said that they were held for 12 days and fed with uncooked food; drank dirty and salty water and sometimes slept inside the swampy waters.

He said that on the day of their rescue, he heard loud noise which he initially thought was from the villages shadowing the kidnappers’ den.

“But the sound became louder, and only then did I realise that it was from security men because I can hear their voices but I was terrified and confused at the same time.

“Moments later, some men came to where we were kept and requested for our identity. It was only then I realised that they were naval personnel.

Ichikpro said that the navy operatives later took them away for de-briefing.

“I am so grateful to God and the Nigeria Navy for coming to my rescue without paying even a Kobo ransom to my kidnappers,” he expressed his delight.