NDLEA Nabs 2 Dockworkers In Drug Burst At Tin Can Port

The National Drug Law Enforcement Agency (NDLEA) has intercepted consignments of a hard drug popularly called Colorado concealed in vehicles imported from Montreal, Canada, at the Tin Can Island port in Apapa, Lagos. 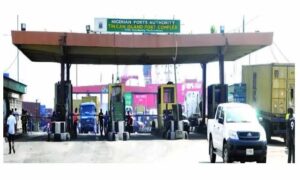 The NDLEA, in a statement by its Director, Media and Advocacy, NDLEA, Mr Femi Babafemi disclosed that, the consignment of 185 parcels of cannabis Indica, popularly called Colorado weighing 61.3kgs have been seized during a joint examination of a container at the Tincan seaport, Lagos

He confirmed that, two dockworkers were arrested in connection with the drug seizure.

“Two dock workers: Abdulquadri Abdulazeez and Ogbuji Kenneth, are already in NDLEA custody in connection with the seizure, following their initial arrest by the Port Security and the Police”, Babafemi said.

He also said that the container marked MSCU5206726 was declared as containing three units of used vehicles.

“But upon a 100% examination, it was found to contain two vehicles; a 2009 Toyota Corolla car and a 2009 Ford Econoline bus as well as used car engines, bicycles, shoes and other items including the drugs.