The Nigeria Export Processing Zones Authority has disclosed that discussions were ongoing with the Delta State Government to revamp the defunct Koko Port Free Trade Zone to attract investments and boost economic activities in the state. 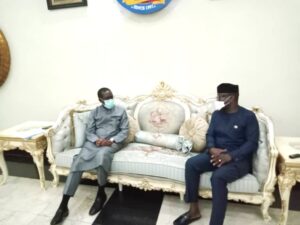 According to a statement by the Head, Corporate Communications, NEPZA, Martins Odeh, the parties agreed to revamp the project when the NEPZA Managing Director, Adesoji Adesugba, paid a courtesy visit on the governor, Ifeanyi Okowa recently.

It read in part, “The Nigeria Export Processing Zones Authority and the Delta State Government have commenced discussions on the possibility of re-activating the moribund Koko Port Free Trade Zone to attract investments and boost economic activities in the state.

“The parties agreed to revamp the waned multi-billion-dollar project when Prof. Adesoji Adesugba, the NEPZA Managing Director, led some officials of the Authority to pay a courtesy visit on the governor, Sen. Ifeanyi Okowa in Asaba.”

The Koko Free Trade Zone is located about 35 kilometres from the port city-Sapele, Warri North Local Government Area of the state.

The zone has a land allocation of 2,327 hectares with a sea port to be upgraded within the enclave.

Adesugba urged the state to immediately commence the resuscitation of the zone, adding that the government must take the advantage of the zone’s location to attract investments.

According to him, the seemingly lack of interest on the zone scheme by most governors is responsible for the widespread lukewarm attitudes toward embracing the global economic model.

The NEPZA boss restated that the scheme was aimed at boosting the industrialisation in the country, explaining that it was incumbent on the state governments to align with it.

Adesugba, therefore, expressed confidence in the possibility of the Koko port free trade zone becoming a mainstream business ecosystem in the South-South Region of the country if it was revived.

Okowa, on his part, said that his administration will work to resolve the disputes between the state and the consultants which have been the bane of this project.

The governor also explained that it was the desire of the state for the Kwale Industrial Park with 1000 hectares and the Ogwashiku Agro-Allied Park occupying 300 hectares to be jointly upgraded to a free trade zone status.

In another development, Adesugba said the AHL Free Trade Zone, a private zone, also located in Kwale in Delta state had the capacity to reduce gas flaring in the country.

He made the remark during a routine inspection of the zone on Friday.

The AHL zone, a world-class gas plant which secured Presidential license in 2020 has already installed about 40 per cent of its capacity making it one of the fast-growing zones in the country.