The Nigeria Maritime Administration and Safety Agency (NIMASA) has empowered some residents of Cross River with equipment that would engage them in self-sustaining businesses. 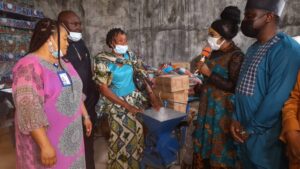 The agency also donated food and non-food items to Internally Displaced Persons in the state.

The items donated include bags of rice, oil, garri, yams, noodles, mattresses and others.

Speaking at the occasion on Friday in Calabar, Director of NIMASA, Dr Bashir Jamoh, said the agency was in Calabar to give succour to the displaced persons and also promote small scale businesses.

Jamoh, who was represented by his Special Adviser on Communications and Strategy, Mr Ubong Essien, said that the agency was reaching out to Nigerians and helping them in the face of the daunting socio-economic circumstances.

The DG noted that the government cannot function and achieve everything alone, hence the need for the agency’s support to make the society a better place.

“We want to raise awareness about the dire conditions of the less privileged among us, to provoke society’s attention at the levels of government, organisations, and individuals on the need to continually lend a helping hand to this category of citizens.

“At NIMASA, we have an integrated support system in place, which is in the form of care for IDPs, capacity building and educational support as part of our cardinal points of the agency.

“NIMASA’s Corporate Social Responsibility intervention programmes are spread across the country, today is the turn of Cross River.

“NIMASA has brought some bare essentials to help the poor and support the weak among us. There are also economic empowerment tools meant to enhance the capacity of citizens to be contributing as functional members of the society,” he said.

Ayim said that the number of IDPs in the state was growing at an alarming rate due to continued cases of communal clashes, flooding and other natural disasters.

Deputy Governor of the state, Prof. Ivara Esu, who was represented by the state Commissioner for Health, Dr Betta Edu, thanked the Federal Government for the donation to the IDPs.

He urged other corporate organisations to emulate the kind gesture of NIMASA in providing succour to the IDPs.

One of the beneficiaries, Mr Etim Okon-Ene, thanked NIMASA for always remembering them, adding that their support has been consistent.