The National Inland Waterways Authority (NIWA) on Thursday inaugurated a jetty as well as the siltation, flooding and pollution control of ferry channels in Lagos. 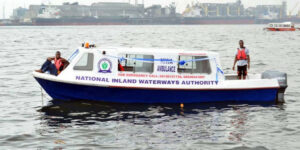 The inauguration was the phase one of the handing-over ceremony of the Ecological Challenges of Siltation, Flooding and Pollution of Ferry Channels and its Adjoining Communities in the state.

The inauguration took place at the Olodi/Tin Can island water channel.

Speaking at the event, the Minister of State for Health, Sen. Adeleke Mamora, noted that the challenges had negatively affected ferry services as marine litters and the shallow channels had made service operators to avoid the ferry routes.

“The dream however is to resuscitate, upgrade existing jetties and make the ferry route operational through removal of silt and solid wastes along ferry channels which is in line with international best practices.

“By and large, the intervention of the Federal Government on the construction of jetties brought about huge relief and assuage the fear of menace of erosion and other ecological challenges in the area,” Mamora said.

The Minister noted that the Federal Government intervention project was executed through the Ecological Fund Office (EFO), Office of the Secretary to the Government of the Federation for the benefit of the NIWA in Lagos State.

He said that completion of the project had further demonstrated Mr. President’s commitment to addressing problems confronting various communities across the country.

“On behalf of the Federal Government, I hereby formally commission and hand over the project to National Inland Waterways Authority,” Mamora declared.

Also, Dr George Moghalu, Managing Director of NIWA appealed to the community to see the project as their own, manage and protect it.

According to Moghalu, government looks for means to develop projects that are beneficial to people but painfully, the same people will mismanage, damage and disregard the projects.

He added that at the end of the day, they would turn round to blame government for not providing them with amenities.

Moghalu reaffirmed the authority’s commitment as an organization to live up to expectation, adding that it would not disappoint but ensure that the confidence imposed on it was guaranteed.

Dr Habiba Lawal, Permanent Secretary, EFO, noted that the risk of shoreline erosion and its negative consequences necessitated prompt intervention of the Federal Government in effecting a holistic approach to the control of flooding.

Lawal, represented by Mr Yusuf Addy said the approach would stand the test of time and address the issue of shoreline erosion menace caused by high ocean current and tidal waves over the years.

Mr Gabriel Adegbite who represented the Lagos State governor stated that waterways transportation was a project dear to the governor and the state would work with NIWA and the Federal Government.

Adegbite urged the Federal Government to provide the master plan of all the projects along the waterways so that all areas of cooperation could be fully explored.