The Bauchi office of the Midstream and Downstream Petroleum Regulatory Authority (NMDPRA) has sanctioned 15 filling stations for allegedly violating operational rules and regulations. 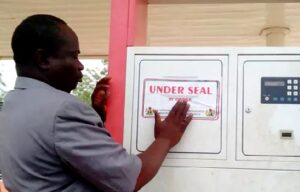 Malam Abdullahi Iliyasu, the coordinator of NMDPRA made this known in a chat with news men recently

“The stations were sanctioned for various offences which include under dispensing of product, breach of safety issues, selling the product above the official pump price of the commodity.

“The agency will not relent in sanctioning erring filling stations. We will seal off their stations and compel them to pay fines depending on the gravity of the offence committed,” he said.

He said the agency has intensified efforts to intensify routine surveillance of existing retail outlets with a view to ensuring compliance with extant operational guidelines.

The coordinator noted that the agency recently received 62 trucks of petroleum products which were distributed across existing filling stations for sale to the consumers.

“Out of the 62 trucks delivered, Kano petroleum has supplied us with 27 trucks while Jos provided 22 and Gombe supplied 13,” he said.

He said the agency would strive to sustain regular supply of the commodity to ensure that consumers were not subjected to unnecessary hardships.

He explained that out of the consignment 13 trucks were distributed within the Bauchi metropolis while the remaining 49 trucks were successfully delivered to the outside stations across the 20 existing local government areas in the state.