The Nigerian Ports Authority (NPA) has expressed the authority’s commitment to protection of lives and property within port facilities in the country. 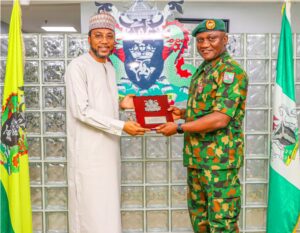 The NPA Managing Director, Mr Mohammed Bello-Koko, said this in a statement on Wednesday in Lagos.

Bello-Koko said that the authority would collaborate with stakeholders and the nation’s security apparatus, especially the military high command to protect lives and property within port facilities across the nation.

He made this remark when he received the General Officer Commanding, 81 Division of the Nigerian Army, Maj.-Gen. Obinna Ajunwa, in Lagos.

Bello-Koko said that the authority had over the years enjoyed cordial working relationship with the Nigerian Army whenever there was the need to maintain law and order within its corridors.

He applauded the swift deployment of soldiers to the authority’s corporate headquarters during the EndSARS imbroglio.

“I thank the army chief for the visit, and assure him that the authority is ready to continue to strengthen the partnership in order to make the port and the nation safe at all times,” he said.

He, however, expressed his regrets to the army chief about the illegal activities said to be going on at the Takwa Bay corridor.

He, however, expressed his regrets to the Army Chief about the illegal activities said to be going on at the Tarkwa bay corridor.

He recalled that the Tarkway Bay facility belonged to the Authority and had been gazetted.

He said that he was surprised that the land was being used to carry out series of illicit activities such as drug distribution and harbouring of hoodlums.

Earlier, Ajunwa said that the military authorities were at the NPA as part of military tradition of familiarising with its neighbours such as the NPA.

He reaffirmed that his personnel would assiduously carry out their core responsibility of protecting lives and property having assumed office in the last three months.

“I assumed duties three months ago. I felt that as part of our training, we should visit installations in my environment and one of them happens to be the NPA.

“My men are ready to carry out our responsibilities of protecting lives and property at all times,” he said.

On the issue of illegal activities at the Tarkwa Bay, Ajunwa said that the command was discussing security related matters with various government agencies by way of being proactive in curbing unforeseen circumstances.