The Nigerian Port Authority (NPA) has said barge operations in the country will soon be concessioned; this is even as the authority has threatened to deal with illegal barge operators whose barges do not meet the required standards. 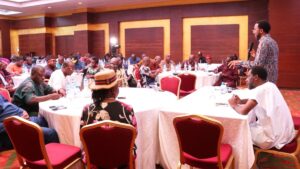 Speaking at a parley with journalists over the weekend in Lagos, the managing director of NPA, Mohammed Bello Koko, stated that concessioning of the barge operations will allow government to generate revenue, while stating that the barge operators have operated freely for so long and must now start paying tariff.

Bello Koko who lamented the impact of some of the illegal barge operators said NPA has come up with a Standard Operating Procedure (SOP) that will serve as minimum safety standards for the barge operation.

According to the NPA boss, many of the barges operating in the country have no communication system, while many of them are not branded. This makes it difficult to effect arrest when they commit a crime, he stated.

He said “We are encouraging use of barges, we have come up with an SOP for barge operations, because we have all types of sizes and shapes of barges that are not safe, the same way we have created minimum safety standards for trucks, we have also created for barges and we have called them for a meeting, they have been operating on free tickets for long that has to stop

“They need to pay for tariffs, we will give them concession to ensure that at least the government generate revenue from it, most of the barges do not have communication system, they are not branded, when they commit an offence, we don’t even know who commit it, We have had situations where ships anchored in the middle of the channel because of a barge in front of it, and that has to stop or we will start seizing them.

“We are going to be very firm, where we need to be brutal we will, because the day a ship sinks in the middle of the channel; we are gone, so in the next few weeks we will not allow some of this barges to operate, we will also insist that they don’t operate at night

“Some weeks ago, a barge sneak out to operate and it bruised a vessel that was offloading liquid cargo; imagine if that has gone aflame”.

“If you go to Kirikiri, you see them double banking; you can’t double bank so we are going to have big issues with the barge operators soon” he said.

The Managing Director of NPA also disclosed that most of the nation’s seaport are already old and require total rehabilitation.

Koko said because of this, the NPA is channeling attention towards the rehabilitation of these ports, and that the World Bank has shown interest in providing funds for the reconstruction of quay walls and collapsing infrastructure. He singled out Tin Can port, Apapa port and River port as worst affected.

The NPA MD however said that it was awaiting the go ahead from the Federal Government to access the World Bank funding.

“We have had interest from the World Bank, among others. Surprisingly, it was the World Bank that actually gave money to the NPA to construct part of Apapa port so many years ago. The World Bank has come again to tell us that if we need funding, they will give it to us.”

Acknowledging the state of the ports in the eastern operational flank of the NPA, Bello Koko assured that the NPA under his watch will do everything possible to ensure that all the nation’s seaports that are in poor state are rehabilitated.

According to him, “the essence is to attract more ships to our ports, which will bring down the cost of shipping and eventually lead to a fall in the cost of goods in the market.”

While opening up on other possible sources of funding for the ports’ rehabilitation project, he disclosed that the NPA is also looking at the option of asking the terminal operators to provide the funds, and work out modality for recouping their investments.

“We have very old ports, one of the major problems is the decayed infrastructure; TinCan Island is practically collapsing and so we decided to focus our budget toward the rehabilitation of key ones.

“What we have done was to start talking to lending agencies, we have started talking to terminal operators who have operated within 10 to 15 years that their leases are about to expire, on how much they will put back.

“For their leases to be renewed, they need to contribute to the development of the ports. If they don’t, we will give them to someone or borrow for them to be rehabilitated. But the rates to be paid will go up.

“If we don’t do that they will keep managing those places,” he said.

He also told the journalists that the Infrastructure Concession Regulatory Commission (ICRC) was not in exsitence in 2006 when most of the terminals were concessioned. He added that since the ICRC, which is the Federal Government agency superintending all concession agreements, has come into being, it has been brought into the concession agreement between the NPA and the terminal operators.

“It was after the concession agreement that the ICRC Act came onboard. The ICRC Act requires that there should be a new owner, a new bid and so on and so forth”, he explained

“So as the game has changed, we are asking the concessionaires to make financial commitment on what they will contribute to the revitalization of the ports where they are operating. So, what we have just done was a six months extension, a period in which we are expecting them to come forward with what they can offer for the development of the port”, he said.

He confirmed that, the re-concessioning of the terminals or renewal of the existing concessions will take place soon”.