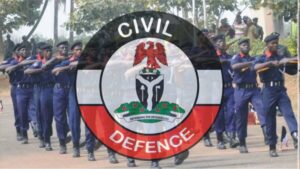 Mr Suleiman Marafa, the Commandant of the corps in the state, said at a media briefing in Uyo on Wednesday.

Marafa said the suspect, aged 36, was arrested by NSCDC operatives in Akwa Ibom on Aug. 19, along Ikot Abasi-Port Harcourt highway while bringing in the product from Ogoni creeks in Rivers.

He explained that the second suspect abandoned his vehicle and fled on sighting operatives of the corps, adding that the two vehicles seized were registered AKD 940 EG and ART 994 AA.

The commandant said that the suspects concealed the product in cellophane bags tucked inside the booths of their vehicle to beat security checks.

Marafa assured that the NSCDC would continue to pursue and apprehend criminals sabotaging the nation’s economy.

“The Corps under my watch will not relent in hunting oil thieves and vandals who are sabotaging the Nigerian economy.

“We have increased surveillance and patrol in identified flashpoints. I want to assure you that it’s not going to be business as usual for criminals and enemies of the state.

“The suspect will be arraigned in court soonest, where he will answer for his crime. I want to appeal to our youths to desist from crime,” Marafa said.