Ogoni stakeholders have unanimously adopted the Rivers State Governor, Nyesom Ezenwo Wike, to lead a multi consultative forum to dialogue with the federal government on issues that would lead to the resumption of oil exploration in OML11. 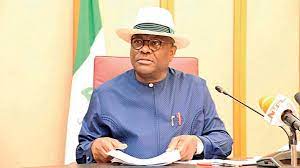 This is in line with the directive of President Muhammadu Buhari that despite the takeover of OML11 by the Nigeria Petroleum Development Company, a subsidiary of NNPC, that NPDC should consult and dialogue with the Ogonis with a view to resolving all issues, to fast track oil resumption in Ogoniland.

The stakeholders said the choice of the governor was aimed at preventing saboteurs who may want to adopt divide and rule tactic to cause crisis in Ogoni at the detriment of the people.

Briefing journalists after the closed door meeting with the governor at the Government House, Port Harcourt, the former President of the Movement for the Ogoni People, Ledum Mitee, said the meeting with Governor Wike is sequel to the meeting, a delegation of Ogoni leaders had with President Muhammadu Buhari a couple of weeks ago in Abuja.

Mitee said the Ogoni delegation to Abuja discussed a number of issues and it was important to brief Governor Wike on those issues.

“We reviewed the outcome of that meeting and we, as a people resolved that, the issues that were discussed are such that required partnership with the state government.

“In other words, we felt that the Government of Rivers State and Ogoni people would work together to pursue some of those issues that were raised as outcome of that meeting, specifically on the issues of OML 11 and resumption of oil.

“We felt that it required some sustained and painstaking consultation process which must involve the State government as partnering with us and its leadership on how we will go together to work. So that, some divide and rule will not be exploited to the detriment of our people.”

Also speaking, Senator Lee Maeba, said the Ogonis are resolved to file behind the leadership that will be provided by Governor Wike concerning the setting up of a multi-consultative forum.