Officers of the Nigerian Navy in Delta State on Monday destroyed an illegal oil bunkering vessel arrested with stolen crude oil in the Niger Delta creeks. 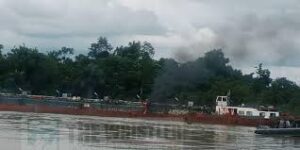 The operatives of the newly-contracted private oil pipeline surveillance team, Tantita Security Services, effected the vessel’s arrest alongside its seven-member crew and the Captain, on October 6, 2022, on the creeks of Escravos, whilst crude oil was being loaded illegally into the ship.

About 600 to 650 cubic metres of illegally lifted crude oil in five compartments was said to be on board the vessel with registration number L85 B9.50 as at the time it was arrested.

At the time Tantita operatives and Nigerian security officials swooped on the captain of the vessel, Captain Temple Manasseh, from Bayelsa State and seven other suspects, they had pumped 605 cubic metres of crude oil into the vessel with 12 compartments from an illegal connection attached to a CNL crude pipeline, between Abiteye community and Escravos in Warri South Local Government Area.

The vessel bore an International Maritime Organisation, IMO, number, 7210526, at the time it was apprehended in the Escravos River.

Sources said the vessel, which was arrested for oil bunkering in September 2021 was released, allegedly after greasing some palms. It was added that the ship had been frequenting Niger Delta and illegally loading crude oil from Nigeria to Ghana for many years.

It was learnt that the owners of the vessel have not come out openly, but they offered to give an official of Tantita a kickback of N25 million in dollars to release the vessel, which he rejected.

The eight suspects, including the captain, have been handed over to the Joint Task Force, JTF, in Niger Delta and are cooling their heels at the 3 Battalion, Nigerian Army, Effurun, near Warri.

I was hijacked, forced to the location —Captain

The captain of the ship, Temple Manasseh, told reporters that the seven others hijacked him and forced him to the location to load the vessel for them.

“It happened on October 6 and the operation was for about two and half hours, they loaded the vessel after a Chevron facility.”

However, Marine Intelligence Consultant to Tantita Security Services Limited, Captain Warren Enisuoh, who shed light on the operation, said: “The vessel is 87 metres long with 12 cargo compartments. It is not an ocean-going vessel, it is a river vessel, but somehow, they converted it into an ocean vessel.

“The crew is very smart, no doubt about that, but they are not smarter than the Nigerian National Petroleum Corporation Limited, NNPCL, and the country.

“It is among the list of vessels being monitored constantly and it has been evading the authorities for some time. It is frequenting the Niger Delta and carrying crude illegally to Ghana, precisely the Port of Tema.

“Therefore, Tantita laid ambush for this vessel and it fell into it on October 6.

“It came in to load; they brought the ship from Escravos, and went alongside into the creeks where they did not know we were waiting.

“We allowed them to connect their hoses from the Escravos-Abiteye pipeline and from there they started pumping crude into the vessel.

“Then, we took them by surprise. The pipeline they were pumping from is actually a major line that goes to the Chevron Terminal.

Five compartments had oil, the total crude we found is 650 cubic metres of crude oil separated into several compartments because they could not finish the operation before Tantita swooped on them.

“They did not go to the Chevron Terminal to load, they went illegally into the creek (bush) where they criminally connected their hoses to the major line and started pumping the crude from the pipeline into the vessel.

“In this very operation, we have arrested seven persons and they are all Nigerians by their names. They were taking the crude to Tema Port in Ghana.”

On Captain Manasseh’s claim that some hijackers abducted him to load crude onto his vessel, the Tantita consultant, Captain Enisuoh, said: “That is his claim but the documents prove otherwise.

“He (Manasseh) said he joined the ship as captain, about two and a half months ago, but records show that the authorities detained the ship here in Nigeria, back in September 2021, but later released.

“And the documents also show that he was the captain on board at the time and he said this was the first time he was on the ship.

“If it is the first time, as he said and they arrested the ship in September 2021 and released it, then he was the captain then and has, therefore, been on the vessel for more than a year.

“The vessel has been coming in to load crude oil and discharge in the Port of Tema in Ghana and somehow, somewhere, on October 6, it came in to carry out its nefarious activities.

“We knew about it; we did not want to stop them. They came in at about 6.00 pm on that day, and then they started operation slowly from a line that Chevron operates, which runs between Abiteye and Escravos.

“They kept pumping before Tantita moved in to apprehend them and the vessel. Tantita handed over the vessel to the JTF.

The Operational Head of Tantita, Epibade Kari, who led the team that intercepted the vessel, said: “We got a tipoff that a ship was loading at the Escravos axis. The Tantita security personnel went to the place and got the ship arrested.”

Kari, who is the chief security officer to Tompolo, added: “I insisted we will take the crew to Oporoza in Gbaramatu Kingdom where Tantita operational office is located. Their boss begged me through the captain of the ship to offer me a bribe of N25 million, which he promised to deliver in dollars so that I can let the ship go. But I turned down the offer.”

The Nigerian Navy personnel set the ill-fated vessel on fire on Warri River at about 3 o’clock on Monday afternoon following confession of the Captain of the ship, Temple Manasseh, that the vessel was actually crude-laden.

Manasseh, in his confession, stated that operatives of Tantita Security Services actually arrested him and his crew members.

He said, “I was arrested in Escravos by Tompolo boys, but the alleged stolen crude oil was not loaded by me. My vessel was hijacked by some boys who forced the loaded crude into my ship. I don’t know the hijackers at all. But when Tompolo security operatives stormed the scene, they all ran away and abandoned their loading operation which had lasted about two and a half hours.”

Speaking further, Capt Enisuoh further told journalists that, “Tantita actually has intelligence on five vessels. It was the only one (the destroyed vessel) that came in since the security operations started. And the identities of the vessel’s owners have been established.

“Our advice is that the rest should not come near Nigerian waters because if you think Nigeria is not serious, today’s revelation is their answer.”