One Dead As Laden Containers Fall On Vehicles On Apapa Oshodi Expressway, Lagos

A commercial bus driver was killed on Thursday when twin 20ft containers fell on vehicles plying the ever-busy Cele bus stop along the Oshodi-Apapa Expressway, in Lagos State. 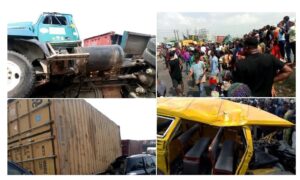 It was gathered that the truck driver lost control while trying to manoeuvre the bad road, causing the container on it to fall on the vehicles.

While occupants of the two SUVs and passengers on the bus survived, the bus driver was crushed under the weight of the container.

An eyewitness, who identified herself only as Mamus for personal reasons, said the commercial driver drove against traffic.

She said, “The accident caused gridlock, I had to trek. It’s a three-lane road; those going to Cele take the third lane. The commercial bus took a one-way route, so it faced the truck and two SUVs that were coming ahead.

“The truck driver was trying to link the road leading to Ago Palace Way, but the road is bad, so in trying to manoeuvre, the container fell on the commercial bus and badly damaged the two SUVs.

“No one was injured in the SUVs and the passengers on the bus came out unhurt; the driver of the bus was stuck under the container.

“Sympathisers called some workers to pull him out but the container fell again with more impact, killing the driver. When the container first fell, the driver was still alive and was crying, but it was the impact of the container falling deeper that killed him. They had to cover him with one of those black bags; there was much blood on the road.

“The roads were being fixed and vehicles weren’t supposed to pass there. It was an unfortunate incident.”

“Further information gathered at the scene revealed that the truck driver lost control due to mechanical fault (brake failure) while at top speed, before ramming into the vehicles ahead of it.

“Unfortunately an adult male (bus driver) lost his life to the incident while the injured victims (4) four in number (3) three males (1) one female have been transported to hospital.

“Recovery operation pending as the atmosphere is charged with street urchins attacking people at the scene.

“However, the remains of the deceased have been bagged and handed over to the relatives.

“The Agency has requested for police coverage to manage the safety of our first responders.”

The Lagos State Traffic Management Authority while confirming the incident on Thursday afternoon, said the accident happened on the main carriageway opposite a filling station, inward Cele from Oshodi.

“It involved an upturned 40ft container on a commercial bus.

“Police officers from Ilasa division are on the ground doing the needful and also effort is on for recovery,” the agency wrote on its official Facebook page.