Onne port in Rivers state has received its first ever export-laden barge of 120 TEUS of Cocoa bound for Antwerp, Belgium via Cotonou. The export was received at the port on February 10, 2022. 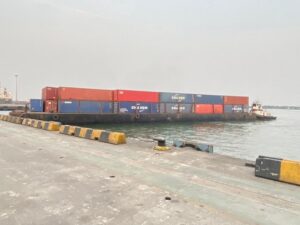 According to the NPA, the development was a testament to the efforts of the Mohammed Bello Koko-led Management to stimulate activities at the Eastern Ports by providing incentives for shipping lines and consignees to patronize the ports located in Calabar, Warri, Rivers, and Onne.

Recall that, while speaking at the just-concluded Stakeholders’ Sensitization on Patronage of the Eastern Ports which was held in Port Harcourt, the Acting Managing Director of the NPA; Mohammed Bello Koko had reiterated the resolve to create the enabling atmosphere to grow vessel traffic in the eastern axis of its operations.

It will be recalled that the management of the NPA had developed a Standard Operating Procedures (SOP) for Barge Operations and backed the respective Port Managers to adapt the SOPs to suit the peculiarities of the eastern port terrain.