Vice President Yemi Osinbajo, has urged Nigerian exporters to take advantage of the African Continental Free Trade Agreement (AfCFTA), for growth in the African market while stating that the Federal Government will continue to support Nigerian exporters through its various agencies bringing about necessary reforms to boost the growth of the country’s non-oil exports. 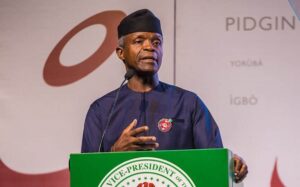 The Vice President stated this when he received at the Presidential Villa, a delegation of major agro-exporters in the country. The delegation came with the CEO/Executive Director of the Nigeria Export Promotion Council, Mr. Segun Awolowo who formally developed a Zero-Oil Plan designed to move Nigeria away from being an oil-dependent economy.

Highlighting the approval of the National Development Plan by the Federal Executive Council, the VP stated that “one of the major components of that Plan is that we are trying to move away as much as possible from our dependence on oil and gas proceeds as our major sources of foreign exchange. You have seen a trend towards that in revenue figures.”

He further said, “We believe attention needs to be paid to exports generally. Of all the various plans of government that we have, one of the critical things for us now is that we all know that we are moving away very quickly from oil.”

Noting that Nigeria is a principal player in the AfCFTA agreements, the VP stated that Nigerian exporters and businesses can be major beneficiaries of the Agreements.

“For us economically, beginning now, we cannot afford to have a situation where for any reason at all, an area of competitive advantage for us which is agro-export suffers in any way on account of something we can help. Anything we can do, there shouldn’t be a cause for any kind of hindrance to agro-export,” he said.

On support for agro-exports, Prof. Osinbajo stated that government agencies will continue to explore measures to boost exports and improve the economy generally, even as he noted that “agro exporters here are the end-users of the services of government”

He further noted that “most of the government agencies here have already worked with us in the Presidential Enabling Business Environment Council (PEBEC) (which the VP chairs). As members of PEBEC, we already know what the government’s intentions and desires are and we are not averse to criticisms or comments coming from the end-users of government services.

“We should be able to have a robust, free and frank conversation so that we can take steps to remedy whatever needs to be remedied so that we can achieve something for our country and people.”

In his remarks, the Executive Director of Nigeria Export Promotion Council, NEPC, Mr. Awolowo, commended the Federal Government for its efforts and giving credence to non-oil exports in the National Development Plan, even as he said the country could no longer rely on oil as its major foreign exchange earner.

“This meeting is crucial and the exporters are delighted that we have raised it to this level. This shows the government is listening and ready to answer us,” he stated.

In the same vein, the presidential Special Adviser on Ease of Doing Business, Dr. Jumoke Oduwole, highlighted efforts by government to tackle challenges and improve the business environment, such as automation of processes and single window interfaces as it affects trading in and out of the country.

Bello-Koko noted that “with the call-up system, special concessions are given to export containers as long as they are good to go, which means the shipping company is ready to accept the container and documentation is complete and ready.”

He also mentioned that NPA is “working with Nigeria Export Promotion Council to create export processing terminals, about 10 in Lagos and about five in Ogun.”

In their remarks, the agro-exporters thanked the VP for the opportunity to interact with him and the efforts by government towards finding solutions to their business challenges, including the issues with delays at the ports, as well as charges from shipping.