The U.S. Coast Guard completed its investigation into the grounding of the Ever Forward in Chesapeake Bay finding a clear case of human error with a pilot that was distracted as the vessel was due to make a critical turn. The Maryland pilot who was guiding the vessel on its voyage from Baltimore has had his license suspended and is potentially facing civil liabilities for causing the grounding. 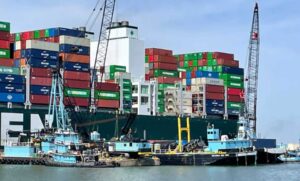 In the parlance of the U.S. Coast Guard, they identified the key issues in the grounding as “the failure to maintain situational awareness and attention while navigating, and inadequate bridge resource management.” The report highlights the actions of the pilot but also the failure of the bridge team to directly alert the pilot to his error possibly preventing the grounding.

The Hong Kong-flagged containership Ever Forward (127,000 dwt) departed Seagirt Marine Terminal in Baltimore, Maryland bound for Norfolk, Virginia on March 13, 2022, shortly after 6:00 p.m. local time with a licensed Maryland State Pilot on the bridge. The 1,095-foot vessel, which has a capacity of 11,850 TEU, was slightly delayed departing due to rope handling issues but was making a regular transit of the waterway with the U.S. Coast Guard investigators citing no weather or other circumstances. It had 4,964 containers aboard when it departed Baltimore.

The master left the bridge around 7:30 p.m. for dinner with the bridge team consisting of a third officer, an able body seaman, and a deck cadet as well as the pilot. At 8:17 p.m., the Ever Forward crossed a predetermined waypoint position that called for the vessel to initiate a turn to approximately 180 degrees from its current heading of 161 degrees.

The investigators determined that no order to turn was given by the pilot and apparently recognizing the error the third officer repeatedly called out the speed and direction of the vessel. The third officer told the investigators that the pilot was looking at his cell phone at this time. It would take nearly a minute till the pilot detected that the pilot’s electronic navigation device and the ship’s Electronic Chart Display and Information System (ECDIS) were showing different information.

The pilot ordered an immediate 15 degrees turn followed 20 seconds later with a command hard to starboard. It was too late and the Ever Forward grounded outside of the Craighill Channel. The master and second officer were summoned to the bridge and attempts were made to reposition the containership before they determined the vessel was aground and began the normal safety protocols. The vessel remained stuck for over a month before it was finally refloated.

Investigators reviewed the vessel’s Voice Data Recorder, which was archived by the second officer moments after the grounding, as well as other data and interviews. They found that the pilot placed or received five phone calls from his personal cell phone lasting in total approximately 61 minutes of the 126-minute voyage up to the grounding as well as being observed texting and writing an email. The pilot was writing an email when the turn was missed.

The Coast Guard also highlights that the pilot distrusted the equipment aboard the vessels he was navigating and preferred to use his Portable Pilot Unit for all the navigation. “He was in the practice of intentionally not using any other navigation equipment while underway, citing a distrust of vessel equipment that was not his own and instances of equipment breaking while a pilot was using it,” the report states. He was unaware that there were paper charts in use in addition to the vessel’s electronic systems.

“A grounding raises a presumption of negligence,” the Coast Guard writes based on a decision from the commandant. As such, they note that the pilot “may be subject to civil penalty enforcement action for negligently performing duties related to commercial vessel navigation.”

They issued two recommendations based on the finding of the Ever Forward case. First concerns vessel owners and marine operators developing and implementing effective policies outlining the use of cell phones and other portable electronic devices.

The second recommendation applies to the vessel’s operators. The investigators found that the third officer, a Chinese national, did not directly alert the pilot when he believed they were missing the turn. The recommendation is for owners and operators to ensure and promote crew awareness of policies regarding the duties and obligations of officers on watch for the safety of the ship, even when a pilot is embarked.