The Anti-Vandal unit of the Nigeria Security and Civil Defence Corps (NSCDC), on Wednesday said it arrested 426 alleged pipeline vandals, impounded 90 trucks and 38 boats from January to July. 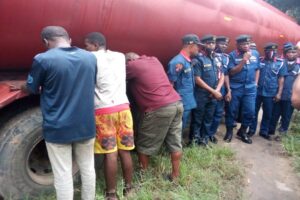 NSCDC’s Public Relations Officer (PRO), Mr Olusola Odumosu, said in Abuja that 73 other vehicles and one tricycle were arrested for related offences.

The PRO said the figures of arrest and vehicles impounded were from Enugu, Edo, Lagos, Anambra, Ondo, Bayelsa, Delta, Kogi, Rivers, Akwa-Ibom and Cross River during the months under review.

Giving a breakdown of the operations of the anti-vandal unit, Mr Odumosu said in January 77 suspects were arrested, 20 trucks and 15 boats impounded alongside 22 other vehicles.

According to him, “February recorded the highest number of arrested persons; 157 persons with 26 trucks, eight boats, one tricycle and 26 other vehicles were impounded.

The spokesman further said that in June, the unit arrested 12 suspects, impounded five trucks, three boats and one other vehicle.

“The last month under review recorded 34 arrests, seizure of six trucks, two boats and three other vehicles,” he said.

He added that some of the suspects were being prosecuted.

Mr Odumosu said in a bid to curb the menace of oil theft, pipeline vandalism and other related crimes in the country, NSCDC Commandant General (CG), Ahmed Audi, recently acquired eight gun boats for the Corps.

He said the gun boats had been deployed to areas with high rate of vandalism as the Corps looked forward to the acquisition of more of such equipment.

He warned criminals that could sabotage the efforts of the corps in protecting the nation’s critical assets and infrastructures to desist from such acts.

NSCDC CG on Tuesday, however, disbanded the Corps anti-vandalism unit nationwide in an attempt to rejig the squad for better service delivery.