Even though he had expressed optimism that Nigeria will exit the inglorious War Risk Insurance classification by the end of September this year, the Director General of Nigeria Maritime Administration and Safety Agency (NIMASA) Dr. Bashir Jamoh, has declared that this may no longer be feasible. 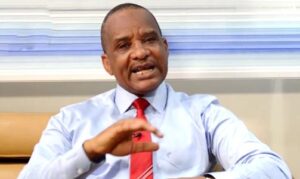 Recall that owing to the successful fight against piracy within Nigerian territorial waters, the NIMASA DG had raised hope of getting the country delisted from the War Risk Insurance list and classification before the end of September 2022.

The War Risk Insurance policy that was imposed on Nigeria-bound cargoes by global shipping interests,

provides financial protection to the policyholder against losses from events such as acts of war, including invasion, insurrection, rebellion and hijacking. The premium varies based on the expected stability of the countries to which the vessel conveying the goods will travel.

The premium varies based on the expected stability of the countries to which the vessel will travel. The war risk phenomenon, which was only known to countries with high rate of piracy such as Somalia, also found its way into Nigeria following massive involvement of youths in militancy in the Niger Delta.

According to the Oceans Beyond Piracy’s 2020 report, the total cost of war risk area premiums incurred by Nigeria-bound ships transiting the Gulf was $55.5 million in 2020 alone, and 35 percent of ships transiting the area also carried additional kidnap and ransom insurance totaling $100.7 million.

However, disclosing why the move to de-classify Nigeria before the end of September may no longer be feasible, the NIMASA DG, Dr Bashir Jamoh in a chat with our correspondent said that Nigeria had been on the list for more than 25 years, it will take more than a year of abatement of incidences of piracy to convince the international bodies to remove the country from the list of war risk insurance premium- paying countries, despite the reduction in the level of piracy on the nation’s waters.

Specifically explaining why September 2022 is no longer certain, he said: “In June they told us that they have completed their quarterly meetings and in September they are going to sit. We are to give them the measures we have been able to put in place on a short, medium and long term basis.

“We have two options which are – removing us totally based on what you have been doing. As you know, most of the physical successes lie in the hands of the Nigerian Navy, because they are the one doing the kinetic operations. We are doing the non-kinetic operation.

Speaking on some efforts put in place by the agency to get the country out of the war risk insurance-bound countries, the NIMASA boss informed that the agency employed over 1000 marine militant marshals with a monthly payment of N50,000 to curb piracy on the country’s waters.

“We tried to introduce marine militant marshals whereby we have over 1,000 people that were employed. We are giving them a stipend of N50, 000 per month. So apparently we are paying them a salary. For about six years we have been paying over 1,000 people N50, 000 each as marine militant marshals to see how they can guard and protect our own ships.

“This year, we created a vocational skill acquisition centre where those who cannot go and study for conventional degrees can go and learn issues of Welding, POP, Carpentry, Plumbing and all kinds of work. We would give you a kind of kit for you to go and establish your own business. We will continue to monitor you. If we graduate 10 and about five or six are successful, then there would be a value chain in the country. We are making sure we sustain the tempo. We are now employing young Nigerians into it. We are building maritime institutions in the six geopolitical zones so that we can have more people employed to have more knowledge in the maritime industry and the maritime domain. In no time we would be able to get to where we want to go” he stated.