Home » QUESTIO OF THE WEEK: What Is Stevedoring?

QUESTIO OF THE WEEK: What Is Stevedoring?

Time spent in port must be as streamlined and as efficient as possible, in order to make the most profit from ship owning or chartering. Ships earn their keep from the carriage of cargos from port to port, not by sitting in port loading or discharging cargo. In fact a ship is penalized for spending more than its allotted time in port, so it is vital that the turnaround is completed as safely as possible in the least amount of time. 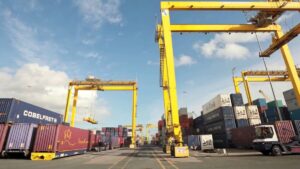 Stevedores, also known as dockers or longshoremen in some places, are the port workers tasked with the job of unloading and loading of ships on the quayside and stowing cargo in the hold as quickly as possible.

Stevedores, whether as individuals or companies, must be expert planners with good integrated systems, to ensure that not a moment is lost in exchanging the cargo, whether that be containers, cars, dry bulk, forest products or any other cargo handled by ports. As an example, for containers, stevedores need to arrange the stowage of cargoes on the quayside so that the one on the bottom of the stack is not scheduled to be loaded before the one on top of it. Likewise, onboard the ship the order of stowage is just as important, partly for stability, but also for quick discharge at the end destination. At car import terminals, stevedores will need to arrange damage-free discharge from multiple-decked car carriers, and might also need to perform added-value services, for example removing the protective packing and grease, ensuring that the cars are ready for the salesroom.

As is evident from these examples, the stevedore’s job involves more than mere labouring. It is skilled work that requires operation of loading equipment, proper packing and unpacking techniques for cargo, and the correct handling of hazardous materials. Linesman, crane or forklift drivers and tally clerks would all come under the broad umbrella of stevedores.

What are the functions of a stevedoring company?

These companies are in charge of handling the cargo operations within the port. The first function of a stevedoring company is the stowage of shipping containers, the loading and unloading of its cargo.

Afterwards they will proceed to sort the different goods that comprise the unloaded cargo. They also have to manage the transportation to its corresponding location within the port.

A stevedoring company is also in charge of the logistical aspects. Crane installation and stowage are some of the other functions carried out by stevedoring companies. For this purpose these companies usually operate heavy machinery such as heavy load cranes, gantry cranes, and other vehicles like reach stackers. The latter are designed to lift containers, load cargo and transport it.

To be able to provide these functions, stevedoring companies need a professional workforce capable of carrying out all the different tasks, from the loading of cargo to the actual running of the company.

What is the role of a stevedore?

A stevedore is a professional in charge of cargo operations: loading, distributing and transporting cargo and other dockside functions. They are responsibles for loading and unloading a ship’s cargo. These workers unload cargo and transport it to and from other ships or to a different location within the port. They are also in charge of any other stacking or sorting of cargo inside port limits when needed.

A more detailed view on the required functions of a stevedore follows:

.Driving the transport vehicles required for the loading and unloading of a ship’s cargo.

.Operating the vehicles and lifting equipment necessary in the stevedoring service, such as forklifts, cranes and other specific vehicles.

.Fastening and lashing of pallets used for cargo stacking after unloading.

.Sorting cargo across the different locations in port for storing purposes or to be made ready for shipping. Workers need to be familiar with the course and itinerary of cargo shipping routes.

.Proper sorting and storing of all and any containers used in cargo transport. Likewise containers have to be stowed on board a ship so as to balance the weight and prevent the load from causing problems out to sea.