Home » QUESTION OF THE WEEK: What Is A Cargo Manifest In Shipping?

A cargo manifest is a consolidated list of all the cargo that is on board a cargo vessel. The list of all cargo carried on the vessel will appear under the vessel name and identification marks of the vessel. 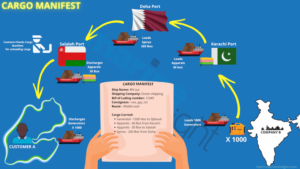 It would also show the route taken by the vessel. A manifest, in general, is a complete list of the cargo or passengers. Just like the cargo manifest, the passenger manifest lists details of all the passengers who are onboard a ship or airplane. This list would include details of the crew members as well.

Typically, a cargo manifest would list all the bills of ladings along with the above details and the total number of goods being transported shown per bill of lading. However, the individual bills of ladings will be attached to this cover sheet.

We can see how the cargo manifest works in this example given below.

Customer A in Djibouti buys 1000 gensets from company B in Kolkata, India. Company B ships these gensets by a cargo vessel. The vessel carries other electrical goods and consumer durables meant for customers en route and in Djibouti.

The cargo manifest of the ship will show the 1000 gensets purchased by customer A as well as the other electrical goods and consumer durables that are shipped on the vessel for the other customers.

Customs authorities at the respective ports will need to review and confirm the cargo manifest against the actual cargo being unloaded at these destinations.

As we can see in this example, the cargo manifest is a very important document for the shipment of goods without which goods cannot be unloaded at their destination ports or loaded from their load ports.

Typical Contents of a Cargo Manifest

Generally, the following details are shown in cargo manifests:

· Document or Bill of Lading number

· Quantity, type, and description of goods

Who Uses the Cargo Manifest and Why?

Answerable to the captain of the vessel, his duties may sometimes include the safety of the vessel and its sailors/passengers.

The typical cargo manifest lists all the goods that are on the ship though it may be meant for several different destinations.

In most cases, the cost of each item is also shown. The list is prepared according to the bills of ladings and the goods loaded from each port of call.

It is a convenient tick-list for the cargo vessel’s first mate or chief officer as each consignment is offloaded at their destination ports.