Home » QUESTION OF THE WEEK: What is the Stern Of A Ship?

QUESTION OF THE WEEK: What is the Stern Of A Ship?

The front of the ship is called the forward or bow region, whereas the back end is called the aft. This is also interchangeably known as the stern, but it is more specific. The stern mainly relates to the section or the structural area atmost in terms of the overall length of the ship. In simple terms, it is more of what you can see when you stand right behind a vessel and look ahead. 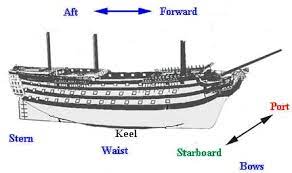 The origin of the word stern is not clear. At the same time, some argue that it came from the distortion of the word ‘stiarne’, which was the allusion to the rudder as per the ancient Frisian and Saxon languages, many claims that it was based on the literal meaning of the word ‘stern’ which translates to serious and unrelenting! Well, if you look at the robust back of a large tanker, it does not look anything amusing or comical, does it?!

However, some experts state that it derives from the era of Vikings in the 8th and 9th centuries when steering or manoeuvring was called ‘styra’ or ‘stjorn’ in the old pre-English languages. This later evolved as ‘styrne’ and, finally, stern in English. This also makes sense because the rudder, the principal device for steering or manoeuvring, is housed underneath the stern itself and attached to the stern frame.

In a more technical sense, the term refers to the structural areas or section (s) associated with the rudder and propeller attachments. It is characteristic of the sternpost, the principal structural member of the stern.

Like any other structural member, the stern is intrinsic to the vessel’s hull structure. It provides closure to the hull volume in the aft part.

Moreover, it also influences the propulsive and hydrodynamic behaviour of the vessel in its wake. Now, what is a wake?

In simple terms, the overall effects in the water behind a vessel include the wave patterns, currents, eddies, and flow behaviour in that particular region. The trace of the ship behind its aft or these effects has a high degree of influence on the propulsive efficiency of the vessel as this influences the resistance.

Imagine having a flat box-shaped vessel like a barge with no defined stern form and the stern of a military frigate ship. Which of them shows better wake and speed characteristics necessary for propulsion? As obvious, it is the latter. Hence, depending on the vessel type and design, the stern is accordingly designed for dealing with the flow behaviour afterwards.

Also, the stern of the ship has a great deal of responsibility for bearing the loads and vibrational effects from the rudder, the propeller and associated shafting and attachments.

Tags: Stern Of A Ship