Record Cocaine Seizures at the Port of Rotterdam in 2021

The Dutch Public Prosecutor’s Office is reporting that it has seized a record volume of narcotics being smuggled into the country in 2021. Most of the illegal drugs are attempting to enter the country hidden in containers arriving at the Port of Rotterdam. Through advanced surveillance and monitoring techniques, the office reports a record both in the volume of drugs seized as well as in the number of arrests. 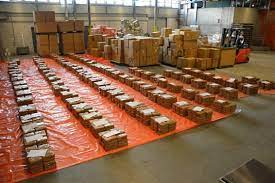 “What surprises us is the enormous increase in big shipments,” customs chief Nanette van Schelven told Dutch broadcaster NOS. Dutch officials said they seized nine shipments each over one ton. Her comments coincide with those of other drug authorities especially in Europe that have reported that the size of shipments appeared to be increasing as well as the brazen level of tactics employed by the smugglers since the onset of the pandemic. Speculation has centered on the disruptions in global shipping which the authorities thought could be causing the smugglers to risk larger shipments to maintain their supply in Europe and other destinations.

In 2021, Dutch customs officers seized a total of 68 tons of cocaine combined at the ports and airports. The volume of seizures increased by more than a third over the 50 tons captured in 2020. The police confirmed that more than 400 people were also arrested at the port while attempting to move the drug shipments. This compares with 281 people caught trying to move drugs in 2020.

In December alone, customs officials are reporting numerous seizures totaling approximately two tons. This included 32 kilos of cocaine that they found hidden in the refrigeration units of a reefer box after a banana shipment from Ecuador had been unloaded and the box was moved to the empties storage area. In a second container transporting cocoa beans also from Ecuador and transshipped in Antwerp they seized 1.5 tons of cocaine while in a container from Brazil loaded with resin cement they discovered 139 kilos of cocaine hidden in sports bags. Earlier in December, two containers coming off the same ship were found to be smuggling 70 kilos of cocaine mixed in with bananas and avocados.

The largest single seizure in 2021 came in October, when they found 4.2 tons of cocaine in two containers arriving from Paraguay and transshipped in Uruguay. The drugs were mixed in with a shipment of soy and the officials estimated the value at more than 300 million euros.

The customer officer said they were capturing more narcotics through additional targeting and identifying containers likely to be the tools for the smugglers. They are also using drones and diving teams to trace the shipments.