The World Health Organisation has for the first time issued concrete recommendations about sexual behaviour for those most at risk, because of increasing monkeypox cases in many countries. 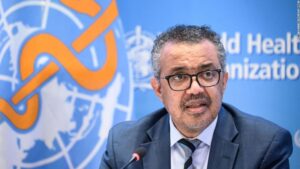 According to WHO figures released last week, some 98 per cent of the reported cases involved men who have sexual contact with multiple other men.

The WHO asked this group to, for the moment, reduce the number of sexual partners, reconsider sex with new partners, and exchange contact details with any new partners to enable follow-up if needed.

However, the WHO stressed that anyone can be infected.

“In addition to the transmission through sexual contact, monkeypox can also be spread in households through close contact between people, such as hugging and kissing, and on contaminated towels or bedding,’’ WHO chief Tedros Adhanom Ghebreyesus said.

He added that the outbreak could be stopped, “if countries, communities, and individuals inform themselves, take the risks seriously, and take the steps needed to stop transmission and protect vulnerable groups,’’ Tedros said.

Ghebreyesus said that regarding vaccination against monkeypox, there are still open questions about the effectiveness or who exactly should be vaccinated.

The WHO does not recommend mass vaccination, but “targeted vaccination for those exposed to someone with monkeypox, and for those at high risk of exposure, including health workers, some lab workers, and those with multiple sexual partners.’’

More than 18,000 cases from 78 countries have been reported to the WHO, with more than 70 per cent of infections recorded in European countries, many of which had previously known virtually no monkeypox cases.

On July 23, the WHO declared the monkeypox outbreak an “emergency of international concern.’’