The House of Representatives has shut down a motion to reopen Idiroko Border and other land borders in the country. 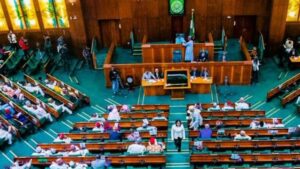 This followed a motion by Rep. Kolawole Lawal (APC-Ogun) at plenary on Wednesday in Abuja.

Lawal had moved a motion on the urgent need to reopen Idiroko Border and other land borders in the country.

He said that though the border closure was sequel to effort by the Federal Government to curb smuggling of goods, but noted that before the closure, the Nigeria-Benin Republic Border at Idiroko in Ogun alone generated annual revenue of over N6 billion.

He said that the Seme, Illela, Maigatari and Mfun land borders had since been reopened leaving other land borders still closed.

The lawmaker said that since the closure of Nigeria’s borders in August 2019, residents of Idiroko had witnessed massive economic downturn.

He also stated the government’s decision to ban illegal importation of food items under the guise of border closure had not increased farmers’ food production as the country is experiencing food inflation.

According to him, if Idiroko and other land borders across the country are not urgently reopened, the people will further suffer.

“And, considering the growing agitation as a result of the closure, this may resort to aggravated crimes to survive as the country continues to lose huge revenue.

However, most of the lawmaker, who spoke on the motion, opposed the reopening of the border.

Rep Rotimi Agunsoye (APC-Lagos) said that it was important for the government to tighten the closure and ensure all the borders were closed to solve the problem of insecurity.

He said that the boarder must be closed, but added that as at now the borders were not closed as they should.

Also, Rep Ahmed Wase, the Deputy Speaker of the House of Representatives, said that the closure of the border had strengthened the fight against arms proliferation.

Rep Ben Ila , Chairman, House Committee on Science and Technology, noted that keeping the border closed for now was the best for the country.

She added that the move was good for “our farmers and even technologist, who are currently making a fortune out of the closure and this will help grow the country.”

“Let us leave our borders close for now in the interest of the country,” she said.

Also, the Speaker of the House of Representatives, Rep Femi Gbajabiamila, while lending his voice to the debate said there was need to consider security of the country before talking of free trade.

According to him, we have to choose between security and free trade, though some people said it had not work, what if the borders have not been closed, I really don’t know what would have happened.

“We should mind internal security, though some say it is hurting employment in term of globalization,” he said.

Meanwhile, Rep Osai Osai (PDP-Delta) disagreed with his colleagues, adding that the Federal Government recently signed an agreement with other countries to allow free trade and free movement.

He added that this policy was to encourage employment, adding that with the border closure, young Nigerians were being deprived the privilege of making something via the agreement signed by the president.