The House of Representatives has urged the Federal Government to compensate the families of three students killed at Ihunbo Community in Ogun by men of Nigeria Customs Service (NCS). 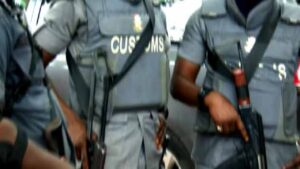 This followed the adoption of a motion by Rep. Kolawole Lawal (APC-Ogun) on Tuesday in Abuja at the floor of the house.

The house also demanded for compensation of those injured at the scene of the incident.

The lawmaker, in his motion decried the incessant killings by officers of Egbado South/Ipokia Federal Constituency of Ogun.

The house urged the Federal Government to ensure that the officers who were indicted in the incidents were prosecuted to serve as a deterrent to others.

The members also observed a minute silence in memory of all the victims of unlawful killings by men of NCS.

The lawmaker noted that Egbado South/Ipokia Federal Constituency “is a border community in Ogun in need of enhanced security and the protection of lives and property is the primary responsibility of government.’’

He said that on Oct. 7, 2019, men of the Nigeria Customs Service vehicle ran into some students of Ojumo Community High School, Ihunbo in Ipokia LGA of Ogun who were returning from School, killed three of them and injured many others.

Lawal said that Egbado South/Ipokia, in the past few months, had been subjected to psychological trauma due to incessant killings of its law-abiding citizens by the NCS officers in the guise of clamping down on smugglers.

He said that they claimed that the accidental killings occurred in the course of discharging their duties, while pursuing smugglers, and the suspects usually escaped.

The law maker alleged that in spite of appeals to the leadership of the NCS in Idiroko and ongoing petition before the house, the officers had continued to act in a wanton manner.

The house, therefore, mandated the Committee on Customs and Excise to liaise with NCS to ensure the training and retraining of its officers to avoid the killing of innocent people and to maintain professionalism in the discharge of their duties.