Home » REVEALED: Why There May Be No Rail Link To Lekki Deep Seaport

REVEALED: Why There May Be No Rail Link To Lekki Deep Seaport

Rail Will Cost More Than Lekki Port Itself - Official

Findings by Shipping Position Daily have revealed that the huge funding requirement may mar the much-expected rail link to the Lekki deep seaport in Lagos. This is because it has been revealed that rail connection to the deep seaport may gulp over $1.8 billion; a cost higher than the $1.5 billion which is the total cost of constructing the deep seaport. 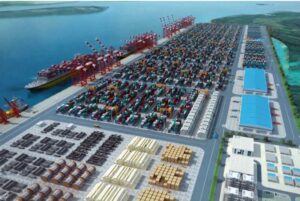 The port, which is expected to commence commercial operations this month (September) has received criticisms from maritime industry stakeholders over the mode of cargoes evacuation, owing to the state of the road leading to the port.

Many residents of Lekki area of Lagos have expressed fear that since the Lekki port is not connected to the rail line, cargo evacuation would compound the already congested Lekki-Epe road, a situation that could replicate the chaos and gridlock being witnessed in Apapa and Tin Can Island Ports axis.

When our correspondent visited the port location, he found out that only a single lane road connects the facility and several other industries in the area such as Dangote Fertilizer and Refinery Plant, Dano Milk, Kelloggs, Indomie, Raffles Oil, and Insignia Prints, to the main Lekki-Epe highway. This has been the case for

Our correspondent also observed that the axis is witnessing a rapid development of over 50 residential estates.

Checks by our correspondent also confirmed that the Free Trade Zone alone has over 800 hectares of land to accommodate nine designated industrial zones.

The Free Trade Zone will host a new international airport, Eleganza Industrial City, and Bolore Transport and Logistics, among others. This indicates that without rail and alternative roads, the volume of traffic on existing roads would increase remarkably and may mar operations at the Lekki portfacility.

However, addressing freight forwarders under the auspices of Association of Nigeria Licensed Customs Agents (ANLCA), who paid a courtesy visit to the port recently, the head regulatory and procurement department, Lekki deep seaport; Mr Daniel Odibe, said the it will cost about $1.8 billion to link the port with rail.

He informed that the rail linkage will start from the Kajola rail terminal in Ogun state to the deep seaport, thereafter to Apapa port.

Speaking further, he said the cost of linking the rail from Kajola to the Deep Seaport will cost $ 1.2 billion, while linkage from the Lekki deep seaport to Apapa will cost $600 million totalling $1.8billion.

Odibe lamented that the 41.8Billion is higher than the cost of Lekki port.

He further said that, owing to the bad state of the road and the unavailability of the rail at the moment, the port will rely on ocean going barges for cargo evacuation.

The Lekki port top man however stated that construction on the coastal road has begun, but said the road construction is expected to last 18 months, which means that the construction of the road leading to the port may not be completed until 2024.

He added that the port will be fully automated when it begins operations and will have the capacity to handle 1.2 million cargo throughputs annually.

Asked about the state of the road, he said, “as you can see, construction is ongoing, the coastal road that is from the Lagos free zone to Eleko, is about 23km, the road construction will take about 18 months”.

He further informed that upon completion, the deep seaport will be able to generate over 170,000 direct and indirect jobs and could generate $4.5 billion annually or $201 billion in 45 years.