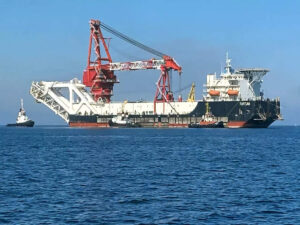 Since mid-November, Russian icebreakers Vaygach and Taymyr have been involved in rescue operations to escort vessels stuck in Arctic waters, including Finland’s Kumpula, to the Kara Sea, due to ice forming two weeks earlier than seen in the previous seven years.

“Favorable ice conditions of past years distorted the impression of some shipowners how to work in the waters of the Northern Sea Route,” General Director Mustafa Kashka said.

His comments come as Russia continues to work on legislation to prohibit foreign vessels from shipping Russian oil, gas, condensate and coal via the route, as well as carrying out icebreaking and coastal navigation in the region.

The draft document was presented in May and may enter into force as early as March 2022, if adopted by the Russian government, the Kommersant newspaper reported.

“To effectively use the water area of the Northern Sea Route, we need to pay more attention to the choice of vessels operating in the last months of summer-autumn navigation,” Atomflot deputy Leonid Irlitsa said.

Russia considers the Northern Sea Route of strategic importance and plans to increase shipments via the route as temperatures rise over the coming years, making it a more significant global transport corridor.