Researchers at Cambridge University, United Kingdom, are suggesting that the ideal duration of sleep for middle-aged people is seven and not more than eight hours. 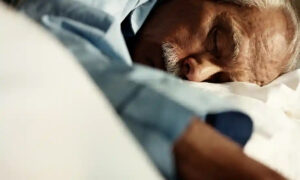 The scientists say they are recommending seven hours of sleep for persons of middle age, noting that it is the sweet spot for general health and the prevention of dementia.

This recommendation came after the scientists monitored the sleep pattern of almost half a million Britons aged between 38 to 73 for 10 years.

The study which was published in the Science journal, Nature Aging, found that seven hours of sleep per night was the optimal amount for cognitive performance and mental health. It also helps keep the brain healthy by removing waste products, according to the study.

The researchers led by Yuzhu Li and Barbara Sahakian noted that lack of sleep may also hamper the brain’s ability to rid itself of toxins.

People who experience anxiety and depression sleep for longer or shorter durations, according to the researchers.

Speaking, Sahakian, who is a professor from the Department of Psychiatry at the University of Cambridge stated that getting a good night’s sleep is not only important at any age but particularly important as people age.

“Finding ways to improve sleep for older people could be crucial to helping them maintain good mental health and wellbeing and avoiding cognitive decline, particularly for patients with psychiatric disorders and dementia,” Sahakian said.

According to the results of the study, both insufficient and excessive sleep duration is linked with impaired cognitive performance, such as processing speed, visual attention, memory and problem-solving skills but those who got seven hours of sleep per night had the healthiest brains.

Read Also:  Some Things That Are Actually Damaging The Kidneys (2)

“They had the best cognitive performance and mental health — with lower levels of anxiety and depression and better well-being — compared to those getting more or less than seven hours sleep,” Daily Mail UK reported.

Another co-author of the study, Professor Jianfeng Feng, a brain expert at Fudan University in China also said, “While we can’t say conclusively that too little or too much sleep causes cognitive problems, our analysis looking at individuals over a longer period appears to support this idea.

“But the reasons why older people have poorer sleep appear to be complex, influenced by a combination of our genetic makeup and the structure of our brains.”