A total of 15 passengers are missing after a ship sank off the coast of Liberia. According to the Liberian government and coastguard officials, the ship sank on the night of 17-18 July. 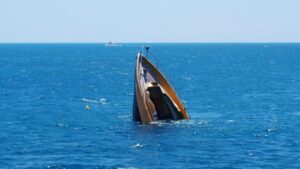 However, the coast guard official further increased the missing people count to 17. There have been continuous search and rescue operations. Liberia’s Maritime Authority Commissioner Eugene Lenn Nagbe stated findings of a total of 11 people till now.

Rescue pursuits began late Saturday afternoon after the authorities received a distress signal from the ship. However, until the authorities reached the accident point, the ship had sunk partially. The rescue ship ‘Niko Ivanka’ left Monrovia on Saturday morning and was heading for the port city of Buchanan.

It is yet to be ascertained how the ship failed to meet basic safety regulations and managed to sail with passengers and cargo. The ship wasn’t licensed or authorised to carry passengers. Nagbe mentioned that the ship’s owner, a Chinese national, had been arrested on Sunday and is currently in police custody.

The records of the ship showed a total of 18 people on board it during its departure. Deputy Information Minister, Jarlaywah Tonpoe, stated that it is difficult to determine the precise number of missing passengers. However, the minister suspects that there may be more people boarding the ship.

The passengers listed on the ship record include a Swedish captain, a Chinese crew member, and nine West African educational examinations body members. Maritime Commissioner, Nagbe, asserted that the priority is search and rescue.

The search for the passengers continued late into Sunday afternoon. Liberia’s coast guard also collaborated positively with a ship from the anti-whaling organisation Sea Shepherd to look out on the nearby shores and the riverbanks.

Steel giant, ArcelorMittal, which has offices in Buchanan, has assisted with the rescue operations. It needs to be mentioned here that Liberia is an impoverished nation that is still recovering after successive civil wars from 1989 to 2003 ravaged the country. It further suffered from the West African Ebola pandemic of 2014-16, killing around 4,800 people in the country.