The Shippers’ Association of Lagos State (SALS) has vowed to reposition the maritime industry through its commitment to ensuring efficiency and ease of doing business amongst shippers and port economic players. This is even as new Executive members of the association were inaugurated. 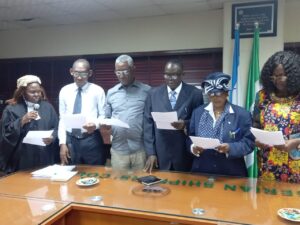 Speaking at the inauguration ceremony at the Nigerian Shippers’ Council (NSC) Headquarters in Lagos, the Executive Secretary of the Council, Mr Emmanuel Jime noted that the association, being one of the foremost shippers’ association in the country has come a long way.

The Executive Secretary who was represented by Deputy Director, Stakeholder Services, Mr Celestine Akujobi stressed that the Council is aware of the challenges the association have been facing, especially with respect to leadership, membership and ensuring the expectations of its members are met. He noted that the new executives have a big challenge to ensure that the association meets the aspirations for setting it up in the first place.

While reiterating the Council’s support to association, Jime however urged the newly elected executives to work hard in ensuring that the confidence reposed on them by members are met.

While giving his acceptance speech, the new President of the association, Mr Leo Ogamba noted that the shippers are ready to take their rightful places and will no longer allow freight forwarders to speak on their behalf.

Ogamba also said shippers are facing lots of challenges due to the non-compliance on the part of shipping companies and terminal operators, adding that about 60 percent of the high cost of doing business in Nigeria is caused by the shipping companies.

The President of SALS, while appreciating the Executive Secretary of NSC and his team for their support to the association, called for the cooperation of all executives and members of the association to ensure the maritime industry is repositioned through the collective commitment of Shippers in achieving an efficient ease of doing business at the ports.

“By the virtue of my experience as the first General Secretary of the association, there is need to reposition the maritime industry through the association’s commitment to ease of doing business. The association will no longer allow the freight forwarders to speak on our behalf. We are supposed to be the one to initiate programme and protests to the Nigeria Shipper’s Council. That is why we have apathy at the ports today.

“About 60% of the high cost of doing business in Nigeria is caused by the shipping companies. I therefore call on the cooperation of members particularly the Executives. By the virtue if the Act the Shippers Association have been given an encouragement by the Nigerian Shippers Council.

“The benefits of the association are enormous, such as having access to regularly benefits from the Nigerian Shippers’ Council amongst others. I am assuring you that once you identify with us the ease of doing business will be achieved” Ogambe noted.