19 truck drivers and technicians have received commendation letters and gifts, including generators, freezers and fans at an award ceremony organised by the Haulage department of the SIFAX Logistics Company Limited, a subsidiary of SIFAX Group whose business offerings include haulage, clearing and forwarding, groupage and shipping. 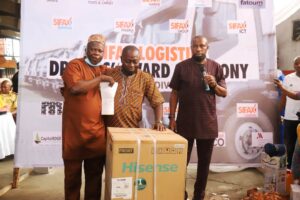 department of the company to celebrate deserving staff for contributing immensely to the company’s success over the years.

In a press statement issued by the company on Tuesday, it stated that the best performing haulage driver team – Yusuf Jamiu and his assistant, Michael Akinkunmi, received the award as the best drivers.

SIFAX said Jamiu led his team to make a total of 93 delivery trips in record time between January and June 2021 and in the process achieving a one hundred percent accident free record while not also exceeding allocated expense. Ayorinde Lukman/Muyideen Oyerinde and Kelvin Matthew/Alabi Olaiya emerged first and second runners up.

In his remarks, Adewale Adetayo, General Manager, Haulage, attributed the successes recorded by the haulage team in the last few years to the dedication and hardwork of its staff members and the reward was a befitting appreciation.

He said: “Over the years, we have grown our truck fleet from 55 in 2017 to 102, our revenue has grown by about 49% while cost of sales have reduced over the years by about 14%. All these would not have been possible without the input of the wonderful team I work with. This ceremony as well as the prizes are our show of appreciation for a job well done and to further motivate the team for a better performance in the second half of the year”.

Bode Ojeniyi, Group Executive Director, SIFAX Group, applauded the haulage team for the improved performance over the years, especially in the first half of the year, in spite of the peculiar challenges in the haulage sector with the bad roads and gridlock on virtually all the roads in the country. He admonished the team to aim higher in order to close the business year on a more impressive note.