A new study conducted by researchers in Spain has suggested that skipping breakfast could put a teenager at a higher risk of psychosocial health problems. 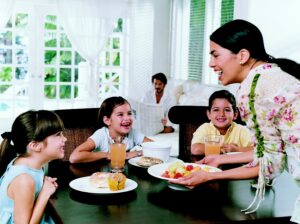 The researchers noted that eating breakfast is important for teenage children’s mental health.

They added that the type of food children eat and where they eat it are also very important.

According to the researchers, eating breakfast at home is vital because it not only provides physical benefits but also psychosocial benefits for teenagers.

The lead study author, a professor at the University of Castilla-La Mancha in Cuenca, Spain, Dr. José Francisco López-Gi said, “The association between skipping breakfast and psychosocial health problems have been previously described in the literature in some scientific articles.

“However, the fact that eating breakfast away from home is associated with greater psychosocial health problems is a novel aspect of our study.”

The team of researchers made use of data from the 2017 Spanish National Health Survey, including questions concerning breakfast status, place, habits, and children’s psychosocial health.

The study included 3,772 Spanish children and adolescents between ages four and 14. The Strengths and Difficulties Questionnaires were answered by parents or guardians of the children.

Results from the SDC questionnaire revealed that 98.9 per cent of the sample ate breakfast, of which 95.8 per cent ate breakfast at home.

According to findings from the study published in the journal Frontiers in Nutrition, skipping and eating breakfast outside of the home were linked to higher chances of psychosocial behavioural problems than eating breakfast at home.

The researchers also reported that certain foods and beverages are associated with higher or lower odds of psychosocial behavioural problems.

The researchers in the study report said, “Our results show that eating breakfast, specifically at home, and breakfast habits related to the intake of certain food/beverages groups were associated with higher or lower odds of psychosocial behavioural problems.

“This finding is clinically meaningful, as psychosocial behavioural problems are one of the most important worldwide worries in the young population.

“It might be possible to underscore the significance of focusing not only on breakfast intake but also on habits related to the consumption of certain foods/beverages to try to reduce the harmful effects of psychosocial behavioural problems in young populations. Nevertheless, further studies with different designs are needed to verify cause-effect associations,” it said.

The team of researchers noted that the availability of nutritious breakfasts would possibly influence the results, as would social and family support that comes during breakfast at home.

López-Gil said, “Our findings reinforce the need to promote not only breakfast as part of a healthy lifestyle routine but also that it should be eaten at home.