Home » So Much Dishonesty, Half Truth About The NIMASA Floating Dock

Just about one week ago, and for the umpteenth time, the Nigerian Maritime Administration and Safety Agency (NIMASA) through its Director General; Dr Bashir Jamoh again assured that its multi billion Naira modular floating dockyard would soon become operational. 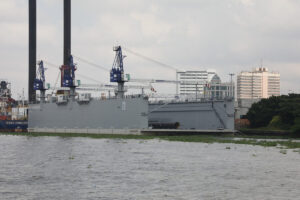 The latest assurance is coming just as the deadline of first quarter 2022 that was earlier given has lapsed.

We recall that Dr. Bashir Jamoh told journalists, at one of his media briefings where he showcased the agency’s achievements and challenges in 2021, that the floating dock will be operational through a Public Private Partnership (PPP). He has also countlessly repeated this.

To underscore the seriousness of the PPP, Jamoh told journalists that, “the Director General of the Infrastructure Concession Regulatory Commission (ICRC), was here to give us the first certificate, telling us that privatising the modular floating dock is profitable and doable, and they gave us the go ahead to do that”.

His words again: “We have gone ahead to do negotiations with the managing partners, and the co-partner, which is the Nigerian Ports Authority (NPA) that is going to provide the Continental Shipyard for the anchoring of the dockyard. Some people are presently in Dubai to inspect the facilities of the managing partner”.

He added that, the foreign partners have also visited Nigeria to ensure that the floating dock is in good shape and that NIMASA has changed all the parts of the floating dock that needed to be changed, before it could be put into use.

And while granting an interview to select journalists on Thursday September 8, 2022, Dr Jamoh opened-up on the true state of affairs with the N50Billion floating dock.

No matter what came out afterwards, what first came out in the media was the exact representation of what the DG said.

Jamoh confirmed that NIMASA has a challenge with finding a suitable location for the floating dock, hence the craft can not yet be useful.

Secondly, he said the much-publicised partnership with the Nigerian Ports Authority (NPA) has hit the rock. He made some rather shocking revelation alleging that the NPA mismanaged its own dockyard, hence not competent to accommodate the floating dock.

The revelation and allegation were after the partnership had reportedly been okayed by relevant government apparatus, that is the Infrastructure Concession and Regulatory Commission (ICRC).

Thirdly, the NIMAS DG said that the floating dock was in a bad state, unequipped with accessories necessary for it to be put to use.

Painting a more terrible picture of the misfortune that has befallen the floating dock, the NIMASA boss stated that agency had to temporary import equipment from Netherlands to clip the floating dock.

Rather than double-talk and pretend that all is well with the floating dock, we think it is high time NIMASA and its DG came out with the real fact about the status of this national asset.

We all can remember that, the now-moribund floating dock, which arrived in Nigeria during the administration of Dr Dakuku Peterside, was expected to serve as maintenance facility for visiting vessels and ships operating in Nigeria.

We haven’t forgotten that, at the stage of conceptualisation, the facility was planned to save about US$100m annually in capital flight; generate employment, and boost local capacity.

If it is true that it was built by one of the world’s largest ship building firms, Damen Shipyards, and its partner, NIRDA, in Amsterdam, the Netherlands, at a cost of N50b, the NIMASA floating dock is 125 metres by 35metres, with three in-built cranes, transformers, and a number of ancillary facilities, how true is the claim by the DG that the floating dock has no accessories to make it work?

Available statistics indicate that, about 5,000 ships call at the Nigerian ports annually, there are about 400 coastal vessels and many fishing trawlers. These make the business of dry docking potentially lucrative, because there is an existing demand.

Read Also: How do you think that the NIMASA floating dock can be put to use?

Sadly, there has been a lot of back and forth since the craft came in to the country, about four years ago. Since then, the expensive craft has suffered diverse treatment; the worse being that NIMASA treats it like an unwanted child, unsure of what to do with it.

NIMASA has had enough time since 2018 when the floating dock arrived; enough time to determine its fate. Rather than do this, it has been dilly-dallying over what to do. As it is now, the facility is not generating any revenue. The worst is that it is diminishing in value and usefulness.

Did NIMASA not know that, it is a regulator and not an operator, hence operating that dock is not an option.

It is apt at this point to point out that it is no longer so much about the imperative of putting this floating dock to use. It is now more about putting a stop to the unending promises. First, it was 2021, and just like we once predicted on this page, the first quarter of 2022 has come and gone, yet the story is still the same.

At the risk of being called pessimists, those who are expecting the craft to be available soon, may need to wait much longer.

The Nigerian maritime industry will hold Dr Jamoh accountable for the failed promises and the current state of the facility.