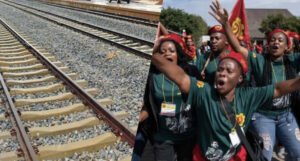 The two labour unions said they will begin the strike on Thursday in a move that could halt the export of key minerals and other cargo.

Transnet has been operating below capacity due to a shortage of locomotives, poor maintenance and vandalism and theft of its infrastructure, costing miners billions of rand in potential revenue.

The United National Transport Union (UNTU), which is the biggest labour union at Transnet, said it had served notice to begin industrial action on Thursday.

The other union at Transnet, South African Transport and Allied workers Union (SATAWU), said it would join in the strike from Monday.

Both unions said Transnet’s offer of a 1.5 per cent pay increase from Oct. 1 fell below their demands.

“Transnet must provide a salary increase offer that is aligned with the increased cost of living, cost of housing, medical costs, housing and, of course, the consumer price index (CPI) that is currently running at 7.6 per cent,” UNTU said in a statement.

Transnet has said any increase beyond its current wage offer would not be sustainable.

“Transnet has consistently made the point that its wage bill currently makes up over 66 per cent of monthly operating costs.

“This is not sustainable, particularly given the current operational and financial performance,” it said in a statement on Tuesday.

Transnet has applied to the Commission for Conciliation, Mediation and Arbitration (CCMA), a state agency that mediates labour disputes, for further talks with the unions.

Both UNTU and SATAWU said the mediation, which is due to start on Oct. 12, would not affect their plans to go on strike.