Sovcomflot has finalized the restructuring of its loan portfolio through the sale of more than 10 percent of the operator of tankers and gas carriers’ fleet. The sales were undertaken to meet the European Union’s May 15 deadline for financial institutions to unwind their dealing with Sovcomflot and other sanctioned Russian corporations while the UK government announced that it has extended its deadline to June 30 to end business with Sovcomflot. 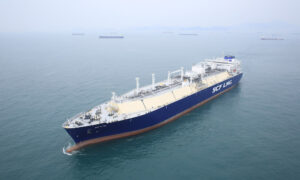 “The group disposed of 14 owned vessels,” Sovcomflot said in a statement to The Maritime Executive. The tanker operator did not provide a total number of vessels that it now owns but reports from Russian media are saying the fleet was reduced to 111 vessels. The company in March 2022 reported that its fleet comprised of 133 vessels with a total deadweight of 11.6 million tons, but that included vessels owned through joint ventures. Lloyd’s believed the directly owned vessels numbered 121 before the recent sale program began.

Sovcomflot is reporting that it achieved the goal to “release a substantial number of vessels from encumbrances. The share of encumbered vessels went down to 10 percent of the whole fleet. The group has reduced its total outstanding debt from $3.0 billion to $1.7 billion.”

Eastern Pacific has been widely recognized as one of the shipowners that benefitted from the sale of assets, winning four of the coveted LNG carriers. The vessels were purchased from a consortium of western banks as part of their efforts to wind-down their dealing with Sovcomflot. The gas carriers are reported to be operating under charter to Shell.

The other transactions are not as clear but there are reports that a shipping company in Dubai and another in Greece each acquired several vessels. The remainder is believed to be individual transactions, although Lloyd’s List and The Wall Street Journal both cited unidentified sources that China Merchants was also believed to be negotiating to buy some of the tankers.

Sovcomflot did not confirm the specific vessels sold or if it might be pursuing additional sales. The company, however, had denied reports from Lloyd’s that said as much as a third of its vessels were to be sold. The Russians referred to the media reports as “exaggerated” saying they were focusing on aging ships and ship operations that had been left idle by the sanctions from the west.

It is believed that Sovcomflot is in the process of transferring the management and registry of its remaining fleet away from Russia. A company in Dubai was reported to be assuming management of the fleet while Lloyd’s List reported that the vessels would be registered in India after the China Classification Society refused the ships while the major western class operators have all announced that they would be withdrawing from Russia.