The Spanish Navy Ship (SNS), MV VIGIA, on Wednesday paid a courtesy visit to the Western Naval Command of the Nigerian Navy in Lagos. 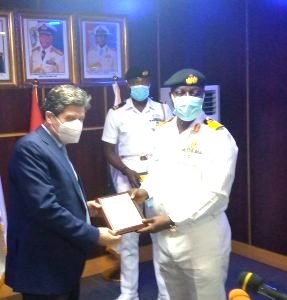 The MV VIGIA, which was accompanied by the Spanish Ambassador to Nigeria, Mr Marceleno Ansorena, was received by the Flag Officer Commanding (FOC), Western Naval Command, Rear Adm. Jason Gbassa.

Receiving the delegation, Gbassa said that the visit of MV VIGIA was aimed at strengthening bilateral relations between Nigeria and Spain as well as enhancing maritime security in the Gulf of Guniea.

“Collaboration is indeed a key factor toward maintaining security over an environment, particularly over a maritime environment.

“Spain, as well as other nations of the world, have found it necessary to collaborate because of the impact of criminalities on our waters to the trade between our nations.

“A secured maritime environment is a contributory factor to the economic prosperity of nations and we are grateful that you have joined hands with us,” the FOC said.

According to him, the visit will also help enhance the trade relations between both countries.

“Earlier in April, we received SNS FUROR and this is now a repeat which goes a long way to show how Spain values her relations with Nigeria.

“We will do everything within our powers to encourage and to further enhance the relations and ensure that the two navies work together.

“We hope that while you are here, you will gladly share intelligence with us and let us know how the Nigerian Navy can assist to make your mission easy,” the FOC said.

Gbassa recalled that Spain participated in Obangame Express 2021 and said had been participating annually whenever the exercise held.

“If the Spanish Navy can oblige us such opportunity, it will be to a great advantage for the Nigerian Navy.

“Their visit is coming at a time when the Nigerian Navy is in dire need of training, especially in the fight against piracy in the Gulf of Guniea,” Lawal said.

According to him, NAVTRAC’s task will continue training and retraining officers and ratings for an efficient Nigerian Navy.

“Recently, we graduated 19 Special Boat Services (SBS) operators from our SBS school and it is gratifying to note that nine of those officers and ratings are from Ghana Navy.

“So, on our part, we have been training sister African countries so as to contribute to our fight against piracy in the Gulf of Guniea,” the FOC said.

He reiterated the need for the Nigerian Navy and Spanish Navy to collaborate in the area of training, especially technical training for officers and ratings.

“I congratulate you on the efforts that you have been putting in the fight against piracy both in the Indian Ocean and in the Gulf of Guinea.

“I assure you that the Nigerian Navy on its part will not relent on its effort in the fight against piracy and illegal activities in our maritime environment,” Lawal said.

Also speaking, the Spanish Ambassador to Nigeria, Mr Marceleno Ansorena, said that ensuring a secured maritime environment through collaboration was important because of the volume of trade between the two countries.

“About 80 percent of the trade with Nigeria goes through the Gulf of Guinea, therefore, it is important for us to participate and collaborate with you.

“Training will be one part of the collaboration exercise as well as sharing information which is important to update knowledge on security about the sea and the Spanish Navy vessels,” he said.

The envoy said that Spain would like to share its experience gathered from fighting piracy over the years with the Nigerian Navy to improve security in the Gulf of Guinea.

“Spanish Navy vessels have quite an experience in the fight against piracy; even now, we have command of the Western Navy vessels at Operation Atlanta in the Indian Sea.

“So, we will like to collaborate and share of these experiences that we have to improve our bond and strengthen our bilateral relationship,” Ansorena said.