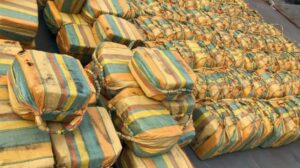 A different group of entrepreneurs has long recognized the utility of sail transport for one of the most valuable artisanal cargoes of all: cocaine. On October 16, Spain’s National Police and Portugal’s Judicial Police seized 5.2 tonnes of the drug from a sailboat about 300 nm off the coast of Portugal – the largest amount of cocaine ever found in the hold of a sailing vessel.

Working in cooperation with the Portuguese Navy and Air Force, along with the organized crime unit of Spain’s National Police Corps, the Portuguese authorities intercepted a 78-foot Spanish-flagged sailboat on the high seas. A boarding team arrested three suspects, all foreign nationals, including one individual who is well-known to the authorities for small-craft trafficking operations. The other two crewmembers had no prior criminal record but were suspected of association with a smuggling ring in the Ría de Arousa region.

Upon a search, the police discovered 183 bales of cocaine with an estimated combined weight of 5.2 tonnes aboard the vessel. At a typical EU wholesale value of about $30,000 per kilo, that works out to about $150 million worth of cargo packed into a 78-foot yacht. Had the delivery gone as planned, the police said, the yacht would have rendezvoused with a go-fast speedboat off the southern Iberian Peninsula to transfer the cargo.

The U.S. DEA, UK NCA and the Colombian National Police contributed to the investigation, which has been going on since August. Spain’s National Police said in a statement that the smugglers on both ends of the transaction – in South America and in Europe – have already been identified.

The smugglers allegedly went to considerable lengths to disguise their operations. They operated with the “latest generation of communication and frequency inhibition systems,” and they gave their vessel a false name and a false flag registry in order to hide its true origins, the police said.