Home » SPECIAL INTERVIEW: How Did Somali Pirates Get Paid?

SPECIAL INTERVIEW: How Did Somali Pirates Get Paid?

Rob Phayre, a former ransom delivery specialist who helped shipowners retrieve vessels and crews from pirates, has written a new novel based on his experiences off Somalia. He recently corresponded with The Maritime Executive about the nature of the work and the root causes of Somali piracy. 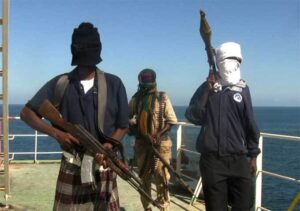 To start, can you tell us about yourself and your career in resolving hostage situations?

I started my career with seven years as a British military helicopter pilot, and I commanded a flight of helicopters in the Second Gulf War. I had the privilege to fly the first British Army helicopter across the border into Iraq on the first day of the war. I also flew in Northern Ireland during The Troubles. Perhaps one of my best experiences was in supporting British special forces when doing their jungle training in West Africa.

After leaving the British Army, I lived in Africa for nearly 17 years, but I was only involved in resolving Somali pirate attacks for about three of those years. During that time, I worked on more than 30 projects delivering ransoms to Somali pirates. I have also supported a number of organizations resolving other onshore kidnapping incidents. If I had to put a figure on the total amount delivered in ransom, it’s just under $100 million.

Can you tell us about how you would arrange for ransom deliveries?

We developed a special mechanism that allowed us to drop the ransom out of an aircraft by parachute. The pirates would collect the money after it fell into the water, take it to the ship, count it and then leave. At that point another team that we had already pre-positioned would board the ship, cross load supplies, help the crew get it underway again and escort it to the nearest safe port.

There were a number of risks during those projects. Delays could mean the pirates would lose patience and we would have to go back to the negotiating table. The money delivery could fail. We never lost a load to a bad drop, but it was close occasionally. The pirates might not have left the ship after we paid the ransom, or the rescue team could get attacked on the way to collect the ship. We managed all of those risks to the best of our ability.

During the peak of piracy, my team and I delivered a ransom that was worth just under $15 million. To give you an idea of scale, that’s about 160 kilos of hundred-dollar bills – about seven large Samsonite suitcases’ worth. It remains to this day one of the largest ransoms paid for hostage taking at sea.

Did the pirates always leave the ship once they were paid, or did they ever try to hold out for more money?

For the projects I worked on, yes. Simply put, they were businesspeople – granted, businesspeople with no moral values, but still businesspeople. If they hadn’t surrendered the ship after a delivery, then they wouldn’t have been paid again. They would accrue all the costs of running their projects and not get any more financial rewards. I am aware of several projects where hostages didn’t get released after a payment, but in many cases, they were not negotiated professionally.

Do governments get involved in negotiating with pirates and paying ransoms?

It’s a very grey area. It depends on the government and the part of the world where the hostage taking has happened. The French government, for example, has passed laws that state that they will pay ransoms to get their citizens back. In fact, there have been a number of protests when they haven’t. Most Western governments will publicly say that they don’t make substantive concessions to pirates. That is the right approach in my opinion.

Nation-states making payments with unlimited funds just raises the cost of ransoms for everyone else. However, it is also right that individuals, if they choose to, should be able to pay ransom to release their loved ones. That all works fine and is generally ignored by governments as long as payments are not made to terrorist organisations.

If terrorists are involved, that’s much trickier. You can’t pay them legally, even through third parties. On the plus side, governmental support may be more likely to happen – but that usually results in a security service response. The risk to the hostage goes up considerably.

This became a concern several years into the antipiracy response off Somalia. As soon as there was a lull in the number of vessels being held by pirates, Western governments determined that the risk of inadvertently paying money to terrorist organizations in Somalia was too high, and they made it a very serious offence to pay ransom. I am not aware of any proof that any ransom was ever directly paid to a terrorist group for maritime piracy in Somalia, but there was always the potential for side payments or protection money being paid by the piracy groups. It was certainly a factor in the decision process for many risk management companies.

A final word on maritime terrorism: this is different from piracy or criminality. The objective is completely different. With terrorism, an actor will target either a specific vessel or a specific flag state to enhance their political aims. Money has nothing to do with it.

What were the root causes of Somali piracy?

I believe that the commonly used explanation of foreign offshore fishing vessels plundering the Somali coast is used too often as an argument. Sure, it’s a potential catalyst, but money and power were the key drivers once they were available. Warlords and clan chiefs could raise huge sums of money, equip their personal forces and expand their fiefdoms. Individuals could earn a living that just wasn’t available to them before. Most of the political leadership didn’t have the power or reach to be able to police the whole of the coastline, and those who did have the ability were most likely corrupt. The existence of a failed state provided safe harbor for pirates to bring home their catch and negotiate their release.

How can piracy be defeated?

In the longer term, only sustainable development, other employment opportunities, the removal of available targets, rule of law and effective military response are the way to continue bringing down the maritime piracy risk.

Rob Phayre is the author of The Ransom Drop, a newly-released novel about maritime kidnapping and ransom delivery. It may be found on Amazon.

Culled from The Marine Executive